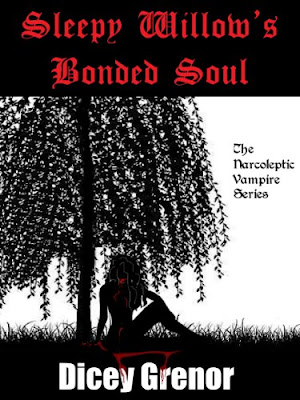 
Ever since vampirism became illegal, the undead have been hunted to near-extinction. So Willow has to watch her back to make sure no one finds out what she is. And that’s not easy considering she’s a vampire with narcolepsy. Predator can become prey at any moment, especially with the skillful Vampire Extermination Team (VET) on the job.

Hoping to blend in with the nightlife, Willow takes advantage of being an animated corpse by performing for necrophiliacs at premiere fetish club Hades. Here, she discovers colleagues with other supernatural secrets. She’s also unexpectedly drawn to Remi, her most loyal fan, despite his deviant sexual nature and personality disorder. But succumbing to her lust is not a good idea since her maistre vampire forbids it.

Now Willow has to outsmart VET agents, escape bounty hunters, and find a cure for narcolepsy…or vampirism. And she’s got to break the bond with her Maistre, no matter how powerful and unrelenting he is.

Most importantly, can she stay awake long enough to do any of it?

What can I say about this excitingly unique, yet familiar take on vampires? Sleepy Willow’s Bonded Soul is refreshingly different, but it still holds many of the familiar lore of vampirism.

Willow is not your normal vampire. She is a vamp with a problem, she has narcolepsy. Strikingly beautiful and extremely resourceful, Willow has taken her medical condition in stride and into her own hands. After ongoing failures to find a cure, Willow turned to one last option, become a vampire. Well to her surprise it didn’t work and now she is a spiritual woman with a strong belief in good and evil, stuck in a vampire’s soulless body.


While reading I had a sense of her inner turmoil. She grew up in a repressive family, but she still holds a strong belief in God. Slowly you watch her lose her humanity and grasp of her religious beliefs. I could see the reasons why for the changes and completely understood them, but felt her pain and dismay.

I think what I enjoyed the most from this book is that it had a feeling of realism. I know, I know it is about vampires….point is, I felt that if there were vampires then this a nice tidbit into their “real” lives. It was not all glamour, money and perfectness. It was hard, raw and darn it rough. Willow has to work hard to stay safe and well fed. Life is not easy for her and she sometimes has to do things that she really doesn’t want to. I enjoyed that she didn’t use her gifts to hurt people or to get ahead in her undead life. In my opinion, this was a realistic view of typical situations that a vampire would have to deal with if they were living in the here and now.

While the problems that are set forth for the character is many and widely different, they were written in a new way. At first it I was like, “Whoa, too much newness”, but it grew on me. The revelations were many and unexpected. I didn’t have many moments of, “seen that coming”. Secondary characters were just as surprising as Willow. Their differences were well written and uniquely diverse.

I have a feeling that this novel is the start of a very interesting series. The indications in the book were that there was more to come and I really can’t wait. I really enjoyed the freshness of the plot. While I have read more gripping storylines, the pace was steady and solid. This book is a great stepping stone for what is to come. Ms. Grenor has written a universe that has the potential to be original, hot and wonderfully exciting. I’m looking forward to future installments of the adventures of Sleepy Willow.

Thanks for reading!! Toni
Posted by Toni at 5:55 PM