First let me welcome you Lord Cyrus and may I say I feel honored to be conducting this interview.

I was glad to take the time out from my busy schedule, Alia. My but you are looking quite delicious today.
Oh, my Lord, please after the interview. What was it like to share glimpses of our world with authors JL Oiler and Suzzana C. Ryan?

You know how I adore human woman and these two lovlies are quite intelligent and may I add, quite decadent in their thinking. I enjoyed speaking with them. They smelled delicious, wanted a nip, but they just shook their heads no.

We have heard rumors of a fallen Archangel entering the city. Any truth to that?

As you know Alkemen is running amuck on the surface it isn’t surprising. You would most likely need to check with Suzzana C. Ryan and her second book in the series, Glimpses of Midnight: Decadence (book 2) to find that out…but I put nothing past that cheating succubus.

How is it decided who gains access into the inner sanctum of the palace?

Alia, they have a key, like yours, and only evil can enter. No goodie two shoes. Boring, sweets, boring, and if I catch any humans down here, I’ll snap their fragile necks. But not before I had a little nip here or there.

My Lord, I hear that Alkmene has left our time. Any truth to that?

The lovely bitch has flown the coop and she’s hiding out, I think it’s a rather peaceful era, nineteen-fifty-seven. I’ll find her cheating ass and she’ll be back home. I wonder why I keep her with me.

My Lord, I think it’s because you love her, she’s perhaps the most beautiful creature in South Hedonism.

Love, ah, I’m a vampire. Love, I love the bitch and when I get her back she going to be punished for disobedience. Now please continue.

Humans topside have noticed a common tattoo shared by all residence of South Hedonism. What does it signify?

Death, Destruction, and Deception. You want to know more you’ll need to read about it.

I've heard rumors of unrest in South Hedonism. Any truth in those?

The city is a world of decadence, indulgence, and obsession. There will always be unrest. I’m curious, where did you hear such a rumor? I am the Lord here. Any unrest will be dealt with severely.

Oh, my Lord, please forgive me, but I do believe it’s just a rumor.
Good, my dear, hate to see anything happen to one of your pack mates, now do we. By the way how are your two mates? I love my werewolves, it takes two males for every female, mmm, can taste the fun, as we speak.

Lord Cyrus, I do believe we’re off the subject. Now are going after Alkmene, oh and has she found herself a fallen yummy archangel?

There are too many humans here, smells too good. Maybe we should ask those two delicious writers, JL Oiler and Suzzana C. Ryan about that. Better yet, perhaps buying Glimpses of Midnight volume one and two and founding out those answers.

Do you hear that, Glimpses of Midnight…..Volume One, Indulgence and Volume Two, Decadence (Oct 17, 2012) Volume One available now.

Oh, Lord Cyrus, you are such a naughty boy, stop that, oh….Good night folks 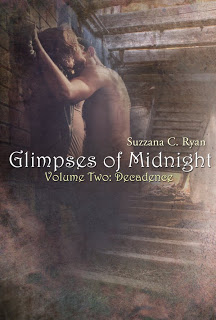 Cyrus Bellefleur ruled the underworld but couldn’t rule his mate, Alkmene, a gorgeous succubus. The feared ancient vampire could crush a legion of humans but found it impossible to tame one redheaded beauty. Their tumultuous union periodically resulted in the succubus fleeing the underworld in an attempt to anger him. She’d do what she did best and that was ravish human men with her temptuous body. Her prowess in bed was her curse. It was at times like these Cyrus followed her into the world above.

This time, however, when she ran from Cyrus, she found a portal in time, traveling to the year nineteen-fifty-seven, looking to hide. But Cyrus could sniff out an opening in the time line.

Alkmene found herself a dark, handsome lover, a fallen archangel, who was ripe for the plucking. But she never figured on his lovely human conquest falling into the mix. Emmy Harris was an up and coming Hollywood starlet and the biggest thing to hit tinsel town in ages. Now Emmy became a pawn in the wicked games Cyrus and Alkmene played.

In a world called South Hedonism, all vices, indulgence, decadence, obsession and perversion flourish. All creatures foul, evil and corrupt exist in the evil inner cities. They come and go between both worlds and love to play above. However, they always return. Hell has its advantages.