GIVEAWAY & Toni's Review of Forsaken by the Others by Jess Haines ***3.5 Stars*** 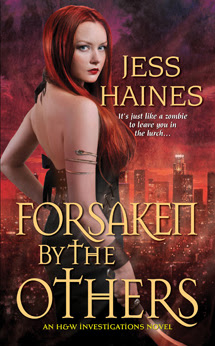 The Others–vampires, werewolves, things that go chomp in the night–don’t just live in nightmares anymore. They’ve joined with the mortal world. And for private investigator Shiarra Waynest, that means mayhem…

Have a one night stand with a vampire, and you can end up paying for it for eternity. P.I. Shiarra Waynest, an expert on the Others, knows that better than most. Yet here she is, waking up beside charismatic vamp Alec Royce with an aching head…and neck. Luckily, Shia has the perfect excuse for getting out of town–namely, a couple of irate East Coast werewolf packs who’d like to turn her into a chew toy.

On Royce’s suggestion, Shia temporarily relocates to Los Angeles. But something is rotten–literally–in the state of California, where local vampires are being attacked by zombies. Who could be powerful enough to control them–and reckless enough to target the immortal? Following the trail will lead Shia to a terrifying truth, and to an ancient enemy with a personal grudge…


Forsaken by the Others is not a book that reads as a standalone.  People who pick it up should most definitely be up to date and ready to jump right in.  It starts right from where Stalking the Others ends.  If you have not read any of the other books in the H&W Investigations series…Do Not Pass Go.  Turn right around and get caught up first.

I apologize right from the start.  This might be a spoiler and trust me I’m not a fan of them, but you can read any other review and it was said long before me; no, no, and NO!!  I was glad I missed the cliffhanger from one of the prior books, because I was late to the series and had to play catch-up.  I’m very disappointed that this one ended in yet another one.  Cliff hangers are not cool, especially when another book is not even on the horizon yet and this book was about a year from the last one.  This was my biggest complaint, but I have other points that bugged me.  Leave me wanting, but not like this.

While I enjoyed the book, there was very little forward movement in the plot.  Yes, you seen a bit of Shiarra’s “problem” manifest, but no reasons why or what.  Yes, a character is healed, but we didn’t even know there was a problem to begin with.  So she hid out in California.  Not sure if I really understand the reasoning, but there we are.  Now she is there and it seems none of the issues in New York are going to be resolved and she has left TONS of them behind.  Several factions were introduced and I feel they were barely utilizes to their fullest potential.  I can pretty much say that most of the main characters are new additions and seem to be sticking around for a while.  Not sure how I feel about that yet.  I missed the “oldies” and wanted to read more about them.  Bummer.

Shiarra actually transgressed in her kick-ass heroine status in my opinion.  She was rather weak and well “human” in the beginning novels.  She rocked my world in the last one, but after all is said and done; we are back to square one.  I will say that she is coming off a very traumatic month and anyone would curl up into a little introspective ball, but she was so darn awesome last book.  Again – Bummer.

I know it sounds like I didn’t like the novel, I did enjoy the read, but in its addition to the series, I didn’t.  Some good points are that we got to see what happened with Royce.  Sara and Shiarra are reunited, along with some memorable White Hats.  The story clipped right along.  There were also some scenes that had me chucking.  I really love when a book makes me laugh.

Ms. Haines wrote a great book, but left me wanting.  I really hope we see progression in the next novel.  I’m still looking forward to next book.  I hope the wait isn’t too long.  I really enjoy her writing style and the H&W Investigations series.  This is the kind of urban fantasy that I enjoy; fantastic paranormal world setting, interesting characters and amazing storytelling.  Keep it up Ms. Haines!

Read my review of book four in the H&W Investigations series.

a Rafflecopter giveaway
Posted by Toni at 11:37 AM