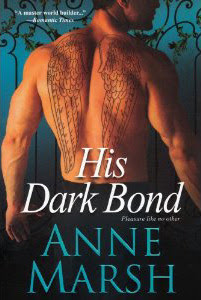 Zer is no angel--well, not anymore. He's explored every flavor of sin imaginable, drinking in the pleasures of humanity. But now he must find the woman who carries his salvation in her very blood. . .a woman like Nessa St. James.

Nessa has considered the bargain the Fallen offer. Anything she wants in exchange for accepting Zer's bond? No way. Not her. Not when she finds out about the mind-blowing ritual involved, and the marks of surrender that will ink her skin. But with a serial killer to stop and centuries of experience on his side, this is one job Zer's going to nail.

I knew dark angels were bad, but I had no idea!

Zer is the leader of the Fallen and he will redeem his fellow angels, no matter what he needs to do.  Finally, things are looking up for the Fallen and he is determined to ensure that he and his brethren will be back where they belong, in heaven.  One human woman is not going to get in his way.  He is bigger and stronger and she will do what he says.

Nessa St. James is a brilliant woman who has no idea what she is in store for.  All she wants to do is continue her research on the mysterious thirtieth tribe, but that has now been taken away from her.  Suddenly her world is filled with danger, death and angels.  She is being forced into a world she has no desire to be part of and Zer will regret the day he kidnapped her.

Time is running out for the Fallen.  They are weakening and they need their soul mates to earn their wings back.  For centuries they have searched for these women, but as time progressed and no soul mates were found, the Fallen started to believe that this option for redemption was a lie concocted by the archangel Michael.  Now that a soul mate has been discovered, it is a race to find other women that can save the Fallen.  Nessa very well may hold the key to their salvation.  Too bad she has no desire to become involved.

Anne Marsh’s take on fallen angels is just wonderful.  She has taken an old tale and put a whole new spin on things.  The Fallen were wrongly accused and cased out.  Now they are living life to the fullest, waiting for the right time to seek their revenge; if time and madness don’t take them down first.

Let me just say, even though His Dark Bond is about angels, there are no religious connotations.  I’m not sure how Ms. Marsh does it, but she does.  The Fallen are bad boys to the core, but she has an ability to make them loveable, ok that might just be pushing it a bit, likeable.

At first glance, these men are pure evil.  They have turned their corner of Russia into their own and they rule with an iron fist.  Guns, murder, and lust are all theirs and they own it.  It’s not until you are allowed into their secret world that you can comprehend their reasons and see that things are not always as they appear.  But make no mistake, they don’t care what you think of them and they will do anything to get their wings back.

Zer feels he is not worthy of redemption and will sacrifice Nessa to one of his brothers.  No matter how he feels about her.  Nessa will not go down without a fight and Zer has misinterpreted the wrong woman.  Their power play was fun to read.  I was completely drawn into this fascinating corner of Russia.

Ms. Marsh has filled this novel with amazing action sequences and steamy sexual tension.  Even though I found some faults with the probability at the end, I enjoyed the book as a whole.  She has written a wonder new universe and I can’t wait to see what is next for these delightfully evil angels.