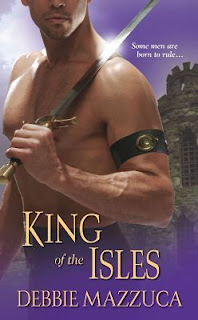 She'll find him a bride if it's the last thing she does.

And it very well might be. Evangeline may be powerfully persuasive in her way, but convincing the notoriously wild Highland king Lachlan MacLeod to strengthen his alliances with a strategic marriage seems to be asking the impossible. Stubborn and proud, Lachlan seems determined to go against her will, even if it means endangering the people he's sworn to protect and the enchanted isle that has already seen so much discord.

Yet the battle-scarred Highlander cannot ignore his sultry advisor for long. When his mentor is kidnapped, forcing him to ride into combat alongside the beautiful Evangeline, he must choose between her safety and his own independence. It's a choice he makes in an instant. . .but once wed to the woman he could not resist, he'll soon find that his heart is in even greater danger than his kingdom. . .

Praise for Debbie Mazzuca and Lord of the Isles

Masculine highlanders, gorgeous fae and mind numbing passion, OH MY!!! What more can a girl want?  King of the Isles is a roller coaster ride with non-stop action and sexual tension at its best.  So hold onto your flying horse, it’s going to be a wild ride!

Lachlan MacLeod has lived a very hard life.  He was born with the mark of the fae.  From the moment of his birth his father hated and despised him.  This cruel pattern has continued on into his adulthood.  Continuous tragedies have hardened him and he is just fine with that.  If he can’t feel then how can he be hurt yet again?

The most important thing to Evangeline is the protection and safety of the Fae of the Enchanted Isles.  She has incessantly had to prove herself.  Her mother once attempted to destroy the fae and Evangeline has paid for it unjustly ever since.  Now she must protect them from an uncaring half-blood king.  She will do anything she needs to do, to ensure her goal, even marry man she can’t seem to comprehend.

Lachlan’s mentor is kidnapped and Lachlan and Evangeline are thrust together.  He is determined for her to not participate in the rescue and she will not be put to the side.  Their journey takes them to the far north and they must learn to trust each other, even though neither wants to trust the blossoming feelings burning between them.  One miscalculation later and they are wed and now a whole new journey begins.  Will they be married in name only or can they get past their fears and insecurities to find happiness in their future?

King of the Isles is an action packed book, filled with battles of steel and battle of wills.  Lachlan and Evangeline are two very strong individuals and their clashing is stupendous.  At times I wanted to knock their heads, just to knock some sense into them.  There were moments of laughter and groans of anguish for me while reading this story.  Even though you see their romance coming from miles away, the journey was worth it.

Ms. Mazzuca has a knack of making me consistently hate these MacLeod men then love them.  My cooling down period is much slower than the heroines in the series.  For such strong women they sure do forgive easily.  I believe that Lachlan is the most narrow minded, arrogant, bellowing before the he thinks, opinionated boob I have had the pleasure of reading.  While he is the one of the funniest men yet, his superiority was stifling at times.  I’m not too sure if that is a good thing or not.  Just the raw emotion that Ms. Mazzuca has drawn out of me should be commended.

I have noticed that she uses the same outline in the three books, but truthfully don’t most romances.  Man finds girl.  Man fights his attraction to girl.  Man gets girl.  Man misunderstands and blows up at girl.  Man feels like an ass and must grovel to girl.  They make up and live happily ever after…the end.  I will say, even though each of the stories in this series are extremely similar in plot format the plots themselves are quite different.

The series has paranormal undertones, but it is very light.  Out of the three books, King of the Isles this is the most paranormal of them all.  Heavy in fae lore and content, I found it wondrous and thrilling, a nice change from the previous books.  I am looking forward to the next book in the series.  It promises to be very different and exciting.

King of the Isles is filled with wonderful Highland men and equally spunky women.  It is very action packed and the steaminess of the book is perfect.  While this book could very well be a stand alone, I highly recommend that you enjoy the series in order.  The other books added to the richness of this story and none of the delicious MacLeod men should be missed.