Toni's Review of How to Lose a Demon in 10 Days by Saranna DeWylde - 3.5 Stars 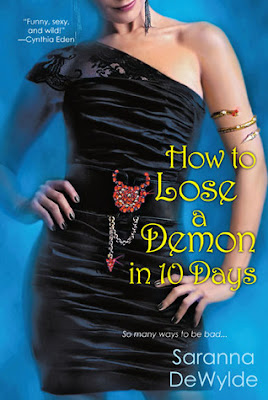 One should never trust demons, let alone shag them. They don't have hearts. Yet Grace is buying hers some slightly tarnished armor and hoping that once he's been shoveled into it, kicking and screaming, he'll find it's just his size. This damsel in distress needs a dark knight for a Happily Ever After.

Fun start to what looks to be a great series!

Grace is in need of some demon assistance.  For four years she has been battling her ex and she has finally decided to call in the big guns.  Those so called guns come in the form of one Crown Prince of Hell, Caspian.  Oh yummy, yum-yum.  The old adage of tall, dark and handsome totally describes Caspian.  Oh, you can also throw in sex-on-a-stick and walking wet dream while you are at it.  Revenge comes first and then well maybe she can….oh never mind.  Anyways, now that she has the ability to fight her ex, Michael, she just has one other thing to do; she must pay Caspian’s price for the contract.

Caspian could be called a bit of a show off.  When his amazing entrance at his summoning does nothing for the gorgeous woman in front him, he is perplexed and intrigued.  Normally women are falling at his feet and this goddess is not even batting an eye at him.  Well he knows how he can change that…the terms of the contract.  She must sleep with him if she wishes to use him to ruin Michael (imagine Grace doing a private happy dance).  Too bad his plan backfires on him and he may be losing more than he planned for.

Their attraction is instant and they practically burn up the sheets, but what do you expect from a sizzling gorgeous demon.  Caspian can make every one of Grace’s dreams come true and let me just say it is delicious!  In the end, is their love making going to be enough for them.  Neither believes a life together is possible, but for extremely different reasons.  What they didn’t know is that there are other forces at play.

How to Lose a Demon in 10 Days is different, but not in a bad way what’s so ever.  It’s has moments of brilliance, some good laughs and a plot that I have never read before; all that makes it a good “different”.  I think I’m unsettled because I think I was expecting more laughs, Michael being tortured more and while the different point of views were nice they became too much.  I felt like I was missing out on things even though I was seeing into others perspectives.  How to Lose a Demon is a really fun read, but at times the humor just didn’t do it for me.  But that being said, there is one scene that will forever be burned into my brain.  I will forever view the act of getting caught during sex differently!!  Ms. DeWylde’s take on it, cracked me the heck up.  If she could make that one singular act worse, she did.  Those poor lovers *snicker*.

Ms. DeWylde’s new series, 10 Days, is a winner.  She ranks high in originality for plot and distinctive situations.  Her ability to bring it all together is perfect and I’m happy with the final product.  I’m just not all tingly and gitty.  I’m pleasantly content.  After reading the epilogue, I’m not sure if I’ll be seeing these specific characters again, but my fingers are crossed.  They were very entertaining and the brought a smile to my face.

I do believe she has unlocked a new universe with endless possibilities.  10 Days is a refreshing new take on paranormal.  It snatches you from the ordinary and makes paranormal fun again.  I’m here for the duration and heading out now to get in line for the next installment, How to Marry a Warlock, out now!

Thanks for reading ~Toni
Posted by Toni at 7:49 AM