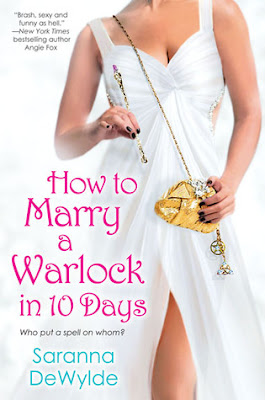 Middy Cherrywood does. She’s got more warlock than she can hex with Dred Shadowins. He isn’t just a billionaire playboy and Weekly Warlock centerfold. He’s a spy for the High Chancellor, and he convinces Middy to pose as his fiancée for his latest mission. Too bad no one told his mother before she slipped Middy a potion that will make their sham engagement all too real in just ten days.

Dred Shadowins already has his hands full with cursed objects, possessed nuns, and dreams where Merlin makes him pay for taking his name in vain by relating his sexcapades with Nimue. But by the end of the mission, he’s convinced his most difficult challenge is the hero’s cape Middy’s draped over his shoulders. Because he wants nothing more than to give her the one thing he may not be capable of providing: Happily Ever After.


Oh yeah!  Aha, now this is what I’m talking about!  While I liked How to Lose a Demon in 10 Days, I REALLY liked How to Marry a Warlock.  Ms. DeWylde was just warming up before and now she is ready to run with it.

Dred Shadowins was the bane of Middy Cherrywood’s existence in the Academy.  He was the typical boy who tormented girls.  He grew into a man that continued to torment them too, but in a *ahem* different way.

Middy’s nightly fantasies revolve around Dred, but it is a secret that she guards tightly.  He is a womanizing jerk, but after the funding for her next big charity event falls through she must go to him for a very large donation.  This is not Middy’s idea of fun.  His favorite taunt for her was calling her Cherry-Would-If-She-Could.  Now she is all grown up and even though Cherry-Hasn’t, she will not allow him to intimidate her.  She needs this for the children and she will endure what he dishes out.

Yes, he knows he’s a bastard, but when he sees something he wants he gets it.  After witnessing Middy blossom into a stunning woman, Dred wants her.  Even though he already planned to donate to the cause, he uses the event to worm his way into her life.  Before he could partake of Ms. Middy, circumstances change and now he needs her help.  Something else Dred didn’t expect was to become the hunted.  Middy is out to have a little taste of the “real” Dred and he’s hard pressed to keep it strictly business.

From donator to fiancé, things escalate quickly.  He needs to find the conspirators, protect his identity and keep his hands off Middy.  Well after a visit to his aunts, he also has to safeguard his heart.  Poor, poor Dred. What is a man to do?

My first thought about this book, when I was only a few pages in was that this is Harry Potter for adults.  I’m not sure if Ms. DeWylde planned it that way, but it worked for me.  I was sitting in my reading nook, downright ecstatic.  I loved HP and the idea we can see the adult side, had me a very happy camper.  For example: when I say Middy’s nightly fantasies revolve around Dred, they really do.  Remember how the articles in HP came to life on the page; well in Ms. DeWylde’s version, they actually come to life!!  Now take a moment to think on that and the advantage for fantasies!

OK, now that I got your attention, How to Marry a Warlock is a very good, saucy read.  The humor in the first two thirds of the book was out-and-out hilarious.  While it became bit more serious towards the end, it didn’t take away from the story.  Laughs were still to be had.

How to Marry a Warlock can be read alone.  As I said in my prior review, I hoped to see the characters return from the first novel and they did.  Not how I expected them to and not as many either, but they helped this story along very nicely.  From reading the next blurb for How to Seduce an Angel in 10 Days, I can’t see that being the case.  They are prior characters and I can’t imagine reading it without the backstory.  You won’t be disappointed, so pick up How to Marry a Warlock and How to Lose a Demon.  I’m truly enjoying this new series.

Snarky characters, exciting new universe and a winning plot all make up How to Marry a Warlock in 10 Days.  It’s a fast and entertaining read that will keep you turning the pages.  Be prepared to lose yourself, but you’ll have a great time at it.  It’s a marvelous world and I am so glad I visited it.  Great job Ms. DeWylde!!

Thanks for reading ~ Toni

My review for the first book in the series. 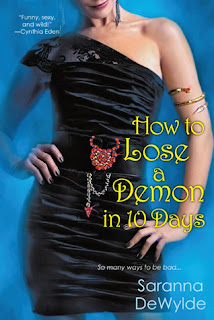 I am giving away my never before read ARC of How to Marry a Warlock in 10 Days.

a Rafflecopter giveaway
Posted by Toni at 9:53 AM