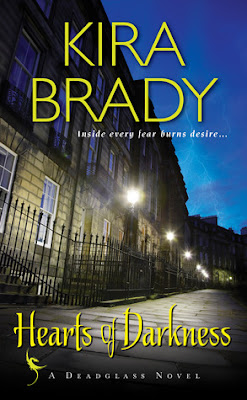 In the first of a dazzling new romantic trilogy, one woman’s courageous search plunges her into a millennia-old supernatural war—and an irresistible passion…

Nurse Kayla Friday has dedicated her life to science and reason. But for her, Seattle is a place of eerie loss and fragmented, frightening memories. And now the only clue to her sister’s murder reveals a secret battle between two ancient mythologies…and puts Kayla in the sights of lethally-sexy werewolf mercenary Hart. He’ll do whatever it takes to obtain the key to the Gate of the Land of the Dead and free what’s left of his soul. But seducing the determined Kayla is putting them at the mercy of powerful desires neither can control. And as the clock ticks down to hellish catastrophe, the untested bond between Kayla and Hart may lead to the ultimate sacrifice.

Ms. Brady did a very fine job on her first novel.  There were a few bumps; some small, some big, but all-in-all, a very entertaining read.

Kayla is light and Hart is dark.  She is a healer and he is a killer.  Put these two together and something special is made.

Kayla has returned to Seattle to expose her sister’s murderer.  From the very start, things aren't what they seem.  Seattle is not the city she expected; shadows are everywhere, buildings are crumbling, electricity is sparse and even more questions arise the moment her eyes are set upon her sister’s dead body.  Unknown to her, her life is going to be thrown into a world she never heard about and to her surprise, a world that she was forever to be a part of.

Hart is bound and determined to get free from his blood bond.  Only two more jobs and he will be a free man.  His plans of running in the wilds are derailed the moment he sets his rifle scope on Kayla’s face.  She sparks something in him that makes his wolf sit up and take notice.  He is too close to fail now and he will not let one woman ruin his plans.

Warring factions, prophetic futures and raising passions have forced these two to work together.  Can they trust each other?  Can they save the world?  Can they find solace in each other’s arms?  With time ticking away, neither have time to think on their choices or the consequences.  All they can do is hope for the best.

Hearts of Darkness is a hard novel for me to rate.  The plot is fascinating, the characters have been developed nicely, the setting is chilling and the book as a whole is rather well written.  I really liked the idea behind the book, but what I didn’t like was inconsistencies in the story telling.

I have to admit first off that I’m a stickler for continuity and reasoning.  There were several areas in the book that something would be clearly stated and then a page or so down the road it would be contradicted and then explained away even further in the book.  If the order of the story telling would have been laid out better, I believe a better product would have been achieved.

To not give any spoilers I’ll just use one example:  The villain states that the dragons can’t have children; why I won’t divulge.  But his mistress was pregnant.  He also states that while he is very old, well over a century, he has a brother that is two hundred years old.  So wait…they CAN have children?  Much later in the book the reasoning was explained, but if the subject came up, prior to the explanation, I was sent back into confusion.  What it turned out to be was that they can’t have children within their species.  Yes, I know a minor spoiler, but this type of problem popped up more than once.  Make a rather important statement, contradict it and then explain the real reason much later.  It was very frustrating.  When this type of problem came up, it yanked me away from the novel and made me engage my brain to think it out, when it should have been lost in the storytelling.

I do have to say, I am rather interested in the base story.  I have not read many steam punk or apocalyptic type novels, but I enjoyed how these two ideas were merged.  When I think of the genres, steam punk is set in the past and apocalyptic in the future, but Ms. Brady gave it a very contemporary feeling.  She also did a great job with her imagery and the premise of the trilogy is superb.

For her debut novel, I give her two thumbs up and I foresee with time, patience and hard work, her storytelling will only get better.  I have very high hopes for this author and I will keep an eye out for her future works.

Thanks for reading! - Toni


Up for grabs is a brand new ARC copy 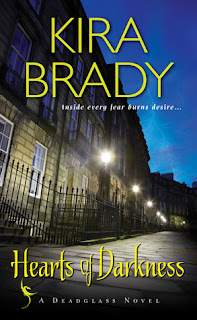 Open to US / Canada only!
a Rafflecopter giveaway
Posted by Toni at 2:25 PM