BOOK GIVEAWAY & Toni's Review of How to Drive a Dragon Crazy by G.A. Aiken - 5 Stars 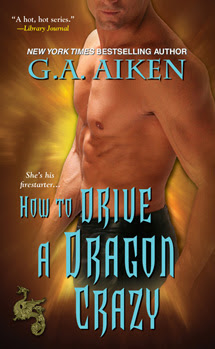 Some things never go away, like vile enemies, bad ale, and annoying kin. Honestly, though, I thought I was finished with the one dragon I'd have done anything for: Éibhear the Blue, a big, gorgeous, blue-haired beast who thinks the world belongs to him. The world and, apparently, me.

If Éibhear wants to play the caring hero and travel into the most forsaken of Gods forsaken lands to protect the one woman who doesn't need it -- namely me -- I'll let him. Because while I'm trying to fulfill a ridiculous quest for a pushy god, I'm going to draw this overconfident warlord much too close, rekindle his fires, and enjoy every minute of his delicious defeat...


By now most of the civilized world knows that Shelly Laurenston is G.A. Aiken, or is it G.A. Aiken is Shelly Laurenston, anyhow…you know this woman can write wit and humor like a pro.  Well she does it again with the next installment of The Dragon Kin series, How to Drive a Dragon Crazy.

I think if you've been following this series, you've probably wanted to know how and when Izzy was going to catch her dragon, Éibhear.  Well that book is finally here and I adored it from start to finish.

Iseabail the Dangerous, aka Izzy, has earned her name, time and time again.  Now she is a General of three legions of the Queen’s army.  She has grown up to be a strong independent woman who has no need to be saved or coddled.  After ten long years, the dragon who captured her heart and then broke it has returned.  She is too busy to deal with him or her feelings when she has a Dragon God breathing down her neck.

Éibhear the Contemptible didn't always have that name.  He was once known as Éibhear the Blue.  He was the baby brother of the dragon siblings.  The most cherished by the women and most tormented by the men.  After a tragedy altered Éibhear’s life, he grew up fast and hard.  Unable to come to terms with his loss or his anger, he leaves all he knows and becomes an unstoppable warrior of the Mì-runach, the Queen’s most deadly fighters.  He has found his destiny or has he?  He has been ordered to return home and one look at the woman Izzy has become stops him in his tracks.  He must now decide to either become the dragon Izzy needs or remain the warrior he has become.

First off, let me say that it is nice to read a really big book sometimes.  How to Drive a Dragon Crazy tops out at around 470 pages.  In a time when it seems novels are barely 300 pages, this was a pleasant change.  Ms. Aiken did a fabulous job keeping me entertained the whole time too.  I never knew what she was going to throw at me and I was always on the edge of my seat.

The rich detail of Ms. Aiken’s dragon world continues to fascinate me.  She does a fabulous job capturing the characters personalities, their dynamic relationships and the nonstop action.  How to Drive a Dragon Crazy is brutally graphic and bloody, yet still makes you laugh when someone loses an eye or something else equally important.  Not really sure how she does it, but I love it!  One would think I’d be turned off from the vivid details of the battle, but it’s so well written I was continually drawn in and could visualize the scene playing out.

I also enjoyed the development of Izzy and Éibhear’s relationship.  They have been dancing around each other for so many years; it was nice to have them finally get together.  While one could say it was abrupt, I could see that it was two matured adults finally able to get past their childish insecurities and misconceptions and take what they wanted.  There were no more walls and while they still played games with each other, it was all done in fun and went to prove how they were two halves of one whole.

How to Drive a Dragon Crazy is an outstanding addition to The Dragon Kin series.  With beautifully described details and heartwarming snark.  This novel is reading perfection with amazing characters, tantalizing sex and blood thirsty action.  It’s exactly what you’d expect from dragons and the humans that love them.

I am giving away my never before read ARC of How to Drive a Dragon Crazy. 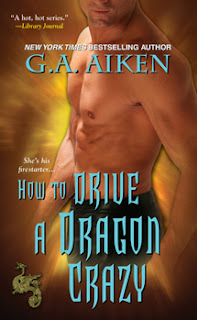 a Rafflecopter giveaway
Posted by Toni at 2:41 PM