Please welcome Dannika to Paranormal Addicts.
She is here to tell a bit about herself and share her new release Impulse with us.  We are one stop of many in her blog tour, so be sure to checkout the other great sites for more chances to win!  Now sit back and enjoy our guest!!

Welcome Dannika, can you tell us a little about yourself how long you've been writing?
Thanks so much for having me as a guest; it’s great to be here! I was born in the U.S., and spent most of my early childhood growing up overseas. My dad was Air Force, and we learned to let go, move on, and look at each change in our lives as an adventure. I think because of that I developed a vivid imagination. I now live in Texas, writing and putting that imagination to good use. All kids write in school as part of assignments, but I began writing at home at an early age. Whether it was in my diary, a notebook, or on my electric typewriter, something was always going on in my head. But writing is just a hobby, right? I managed to incorporate that writing into my day job, but my passion is in writing fantasy. Even as an adult, I’m always daydreaming.
What is your favorite genre to read?
For a long time, I loved reading horror and thrillers. Usually the most frightening books to me were the most plausible, like “The Hot Zone”. Currently, I enjoy reading the genre that I write in, which is a mix of Urban Fantasy, Paranormal Romance, and some Contemporary Romance. I’m pretty much all over the map, as I also like humor books, straight fiction, and fantasy. PNR and UF are the most intriguing because you get to experience very imaginative worlds and characters that other genres can’t always pull off.
Can you share anything your readers would be surprised to know about you?
I can seriously juggle. I even own some juggling balls. I’m not sure I should actually admit that, but it takes a lot of coordination and concentration. Not to mention patience. I haven’t quite mastered four balls, and I sure don’t think I’m ready to try my luck with chainsaws.
What surprised you the most about the writing/publishing process?
How much money and hard work goes into it. I had no delusions that the writing process would be easy, but it’s not until you’re knee-deep in it that you realize just how much work is involved. The constant drafting, the endless editing, marketing, developing cover art, remaining active on social-networking sites, and formatting. I will always do my own covers, but I’ve hired out someone to do my paperback formatting. I’ve also hired editors and proofreaders, and spent time coordinating with my betas. Anyone who thinks you can simply write a book and hit publish will need to research, or speak with someone who is a published author. Indie authors have a lot more going on, because we don’t have a publisher to take away a lot of those additional job functions that are required to put a book out there. On top of all of that, I’m busy trying to squeeze in time to write new books. Whew!
Do you have a favorite book that you have written?
I do, but it hasn’t been published yet. J Of the published books, I’d find it very difficult to choose. It’s not unlike choosing which of your children is your favorite. I think I’m the most proud of “Impulse,” because I didn’t think I’d be able to get through that book because of a difficult year. The story is a lot longer than the previous two, and I decided to just go all out and stop editing it to death. I think readers will really get to know more about the characters in this book, and I fell deep in love with each of them this time around. They are supernatural characters, but they are people with a past, a heart, with sorrow and love, who struggle to better themselves, but are imperfect and make mistakes.
Do you have a book that was easiest to write or one that was the hardest?
“Closer” was a pinch. That novella came out of nowhere when I was editing “Impulse,” and I’ve never worked on two books at the same time. I managed to write that novella in a week, but I spent months editing it and getting it ready for publication.
What three descriptive statements have been used about your writing that made you giddy with happiness?
Unique, original, and unpredictable. I've heard that from quite a few people, and it’s a great feeling to know that for most readers (maybe not all), the story and characters stand out. The last thing I’d ever want to read is 200 reviews on my book that begin with, “Well, if you like xxxx, then you’ll like this book.”
In Twitter fashion use 140 characters or less, sum up “Impulse” for us.
Mageri Series book 3 reveals secrets you won’t see coming, gives depth to the characters you knew little about, introduces new enemies, and will make your heart melt with romance and break it with tragedy.
Will we be seeing a following book to this story?
Most definitely. Book four is currently in draft form.
If you could pick one actor to portray Logan Cross on the big screen who would it be and why?
I’d have to pick a good-looking single actor that I can meet up with and discuss the character in depth over drinks, of course. Actually, I’m not good with this. I think quite a few readers like Chris Hemsworth for Logan Cross (among several male models). I think that if it ever hit the big screen, I’d love to see an unknown cast. It would make it easier to fall into the world and characters without thinking dreamily… “That’s Thor.”


Thank you so much Dannika for stopping by.

Be sure to check out her book and her website for more information on her and her other great books.  Don't stop reading now.  There is more great information below!! 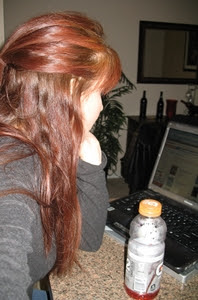 Down in Texas, there's a woman who drinks copious amounts of vitamin water placed precariously close to her laptop. Yeah, I know. I've got a drinking problem. Hi, I'm Danni.

When I'm not writing (which is all the time), I'm listening to obscure music, watching movies, reading, discovering new ways to humiliate myself bowling, and burning up my laptop battery on the internet. I live with a cat who thinks she is a dog, or a goat (she eats plastic, so I'm not sure which).

Some people count sheep when they have insomnia. Since I was little, I used to make up stories in my head in a futile attempt to bore myself to sleep. The problem was, I'd get so wrapped up in my "head stories" that I would continue them through the following nights, changing it up each time to make it more exciting. Eventually, I started writing my ideas down more and more, creating short stories which evolved into poetry.

Lots and lots of poetry. It's almost embarrassing that I have an entire box loaded with spiral notebooks filled with furious, heartfelt, and blushing words. Apparently, I had a lot to say.

Another one of my hobbies is digital art. I designed all my book covers.

I am finally doing what I have always wanted to: giving my characters a pulse through publishing. I write adult urban fantasy romance, but I don't like labels. I let the story tell itself, and color outside the lines. I am not a YA author, but I think it’s pretty great that there are so many books available to teens in Urban Fantasy and Paranormal. These are the future readers!

The work that goes behind self publishing is hard work, I won't lie. On top of my regular day job: I write, edit, format, create cover art, and market.

But it's what I love to do, and someday, I'm going to be doing this full time. 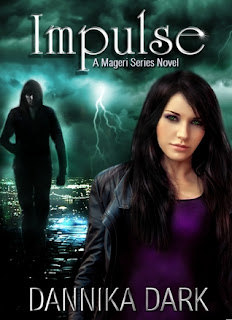 Almost one year ago, a Mage attacked Silver and changed the course of her destiny.
Immortals exist, and now she is one of them.

Within the dark and supernatural city of Cognito, Silver is living under the watchful eye of her Ghuardian and dating her mortal enemy. Neither man can protect her from a dark secret, one buried within the content of a box. As rival factions struggle to gain control, she finds herself in the middle of a centuries –old feud that threatens to drive a wedge between her and Logan Cross, the man who intends to seduce her.

In an explosive turn of events, one life is saved and another is forever altered. Can Silver trust those around her, or are they hiding a dark secret of their own?

Both hands cupped my face and his forehead touched mine.
“I was made to protect you, female. I’ve claimed you, whether you accept it or not, and it’s an honor that I take very seriously. If any male lays an unwanted finger on you, I will break it. If you hunger, I will feed you. If you’re cold, then I will warm you with my body. If you’re taken from me, then I’ll track you. Never doubt my devotion to you.” He gripped my head firmly. “I once gave a woman my heart, because that’s all I had to give. But you, Silver, you’re the pulse that keeps me alive. I was a soft man once, but no more. I don’t know if you can accept the man that I’ve become, because all I have to offer you is my life. 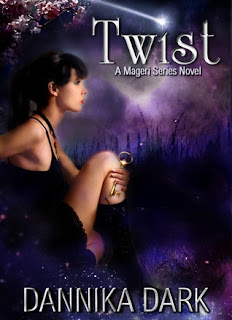 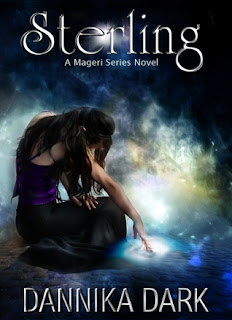 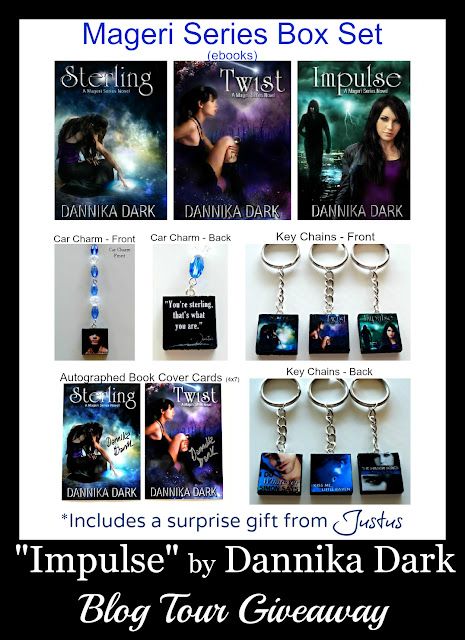 Be sure to visit the other blogs tour stops.  The more you participate the higher chance you have of winning this awesome prize package.

a Rafflecopter giveaway
Posted by Toni at 12:00 AM 7 comments: 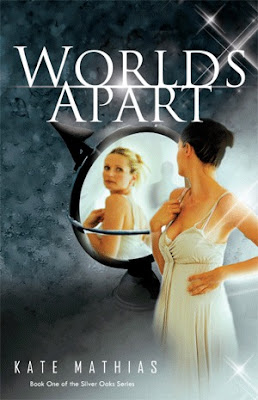 Piper and Pip Reynolds are identical women from parallel realities. They are married to Joe Reynolds and live in the same beautiful house, but their slight differences come from the forks in the road of life and decisions are made. Where Piper is a teacher, Pip is a real estate agent. Through an odd connection they are able to call one another to each other’s worlds in times of great emotional distress or joys.

Kate Mathias creates a new spin on the Paranormal Romance genre. She draws us into the lives, loves, triumphs and failures of two ordinary women in extraordinary circumstances. It’s amazing to see how each woman changes and grows through their friendship and hardships. I highly recommend this book for women and fans of slice of life romance with a paranormal twist.  Kate Mathias gets 4 Enthusiastic Flowers. I can’t wait to read book 2 due in 2013. 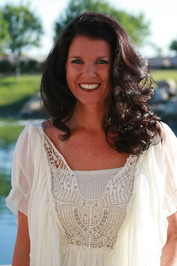 Kate Mathias is a former elementary teacher and real estate agent. She was born and raised in Iowa, but recently moved to Phoenix. he lives in Arizona with her husband and their three children.  Kate recently published the first book in the Silver Oaks Series. She is currently working on the second book, Hiding in Plain Sight set to be released in 2013.  Kate enjoys reading, writing, and spending time with her family.

Find Kate online on Facebook, her Website, Amazon, and Goodreads.
Posted by Unknown at 7:43 AM No comments: