Toni's Review of The Belle Stalker by Minnette Meador ***5 Stars*** 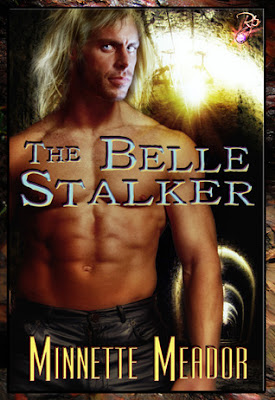 For a year, Belle Stark has struggled to conquer fears plaguing her since being attacked by a maniac, who continues to roam free, and the murder of her father. And she nearly succeeds, until she discovers her lover’s murdered body spread over the furniture, making Belle a prime suspect. Certain her attacker is to blame, she seeks help from her ex-husband, homicide detective Mike Cranston, the one person she swore she would never let back into her life or heart.

In their hunt for answers, the two uncover more than a lunatic: a supernatural underworld hidden beneath the tall skyscrapers of the city and a secret that could kill them both. Faced with a terrible choice, Belle surrenders herself into the hands of a monster, and Mike must solve an ancient mystery before it’s too late to save her...

This is one story that surprised the heck outta me!  I knew the bad guy was bad and there was going to be thrilling suspense, but I didn’t see this story coming!

Belle once lived a quiet life.  She is a divorced woman who enjoys teaching and waiting for her next expedition.  One year ago, her quiet existence changed.  Now she is constantly looking over her shoulder and it’s about to get worse.

Mike Cranston went from being a homicide detective to the quiet life.  He now works in community service for the department.  He may be bored, but he was burned out and needed a break.  His ex-partner has returned and now wants Mike’s help on a case.  This case will turn his world upside down and show him things he never expected.  It will also put him back into the path of the only person he has ever loved.  He lost her once because of his job, now his job experience might be the only to save her.

I normally don’t talk about the bad guy, but this one is the corner of this twisted love triangle.  Is Tequelin good, evil or just plain crazy?  There are points in the book is one and all.  He wants what he wants and he wants Belle.  With an army at his disposal, he will get what he wants.  Now he just needs to control her or he may end up killing her.  After two thousand years, Tequelin will finally have what he desires.  During his long wait he has changed from what he once was into something to be feared and loathed.

Portland is under siege and Belle just may be the catalyst.  One misguided move on her part and she herself will be changed forever.  Mike is back in her life, but to protect him, she must sacrifice her happiness and possibly her life, to keep him alive.

The suspense starts from the very first page and doesn’t let go.  The Belle Stalker storyline only is a few days in length but they are several days I wouldn’t wish on my worst enemy.  I had nagging questions along the way, but they were all answered and I wasn’t left wanting.  I was shocked, satisfied and very pleased with this story.  My only regret is that I didn’t read this sooner.

The love story is very prevalent in the plot but not in your face, so you really cannot call this a romance novel.  This is more of a paranormal thriller.  The evil that Tequelin commits is can be graphic at times and Ms. Meader doesn’t hold back and sugarcoat it.  Her plot is solid and she kept me captivated with her storytelling.  I can’t say this is a pleasant read at times, so don’t go into it expecting that.  The blood is real, the action is intense and circumstances of Belles fate are horrid.  I will say this with 100% certainty though; The Belle Stalker is one kick ass story that will knock you on your butt.  Consider yourself warned!
Posted by Toni at 12:01 AM