Toni's Review of As Twilight Falls by Amanda Ashley ***3.5 Stars*** 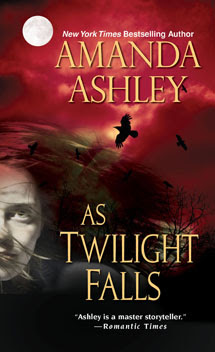 Photographing ghost towns across the American West, Kadie Andrews takes a wrong turn and ends up in Morgan Creek—a spot that isn’t on the map. It’s a quaint little place, but there’s something off about its complacent residents. And when twilight falls, it takes on a truly sinister air…

Unable to run or to find any way out, Kadie finds herself a prisoner, hunted for her blood. Still more disturbing, her spirit and beauty have captured the attention of the town’s leader—the mysterious Rylan Saintcrow. When he looks into her eyes, she can see his hunger. When he takes her in his arms, she can feel his power. When he presses his lips against hers, she can taste his need. Saintcrow may be the most powerful creature she’s ever imagined, but Kadie knows in her heart that he is also a man. A man who needs a woman. To want him, desire him, crave him. To be his willing prisoner—for all eternity…


What if vampires were relegated to live in a town to follow certain rules and were not allowed to leave?  Some might think it would be a good plan to keep humans safe, but what of the human in the town.  As Twilight Falls tell one such story.

Driving into Morgan Creek was a simple mistake on Kadie’s part.  One wrong turn, low on gas and late at night were just a few of her problems.  From the moment she ventures into the town she knows something is off.  The vibes she gets are off the charts wrong and the sudden appearance of Darrick does nothing to ease her feelings.

It doesn’t take long for Kadie to realize she is trapped in Morgan Creek and the residents don’t hold back on letting her know what is expected of her.  They also fill her in on the mysterious head vampire, Rylan Saintcrow.  Luckily he hasn’t been seen in a long while, because the women he takes interest in disappear forever.

Suddenly awake after decades of rest, Rylan is drawn to a new presence in town.  From the moment Kadie enters his territory, he knows he wants her for his own.  Even Darrick’s claim on the girl will not stop him from having her.

Things have changed in his town since he went to ground.  The vampires are restless and the humans are not content.  He never cared about the human’s happiness before Kadie, but now he is seeing things differently.  Times have changed and now he must change too.

Another very important point for this book, it reads as a standalone novel.  The story is wrapped up and complete, with a nice ending that leaves you gratified.  What a wonderful change in the world of serial novels.

Pick up As Twilight Falls if you enjoy standalone novels, unique paranormal storytelling, romance that focuses on the relationship more than the bed play and the writings of Amanda Ashley.  She has written an enjoyable classic vampire novel.
Posted by Toni at 9:08 AM