SERIES GIVEAWAY & Toni's Review of Stalking the Others by Jess Haines ***4.5 Stars*** 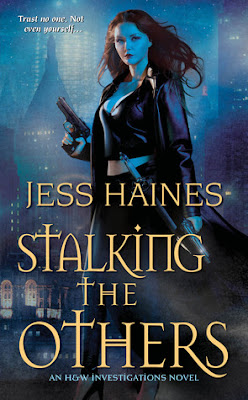 Vampires, werewolves, mages–the Others are very real, and wreaking havoc in Shiarra Waynest’s life. But now, she’s returning the favor…

Once, she was one of the good guys–or as close as a New York P.I. can get. Then Shiarra Waynest was drawn into the world of the Others. Every faction has its own loyalties and agenda. And Shia’s recent betrayal by her ex-boyfriend means that she may be on the verge of becoming a rogue werewolf at the next full moon.

Of course, with all the threats against her, Shia’s not sure she’ll live long enough to find out. The enigmatic vampire Royce wants her back in his clutches, as do two powerful werewolf packs, along with the police. Instead of going into hiding, Shia is enlisting the aid of her enchanted hunter’s belt and every dirty P.I. trick she knows. If she’s going down, she’ll take out as many of her enemies as she can–and hope that in the process, she keeps whatever humanity she has left…


I have to say that this series is new for me.  When I requested Stalking the Others, I knew that this was book four and that I would have to play catch up.  I’m glad I picked it and I’m really glad I had this book after finishing book three, Deceived by the Others.  Get ready for a kick-ass ride!

The Sunstriker pack is on the run.  Their crimes have been revealed, and everyone is looking for them.  The person top on the list:  Shiarra Waynest.  Shiarra has a mission.  Take out every one who has wronged her.  She as a month to do it and she will do anything to accomplish it.  Enemies beware; this woman will take you down.

This one time good girl is now bad.  Over the years, Shiarra has been forced into a world she never wanted to enter.  This new world has ruined her life and broken her heart, but rather than dwell and sulk about it she runs head first into the battle.  You really have to admire her for that.  She may not do the smartest things and may not be the strongest one out there, but you can’t fault her determination.

Stalking the Others is a fast, action packed novel.  I really can’t go more into the story, since I really don’t want to give it away.  I had moments of deep emotion, elation and fist pumping “Heck, yeahs”.  There are also more stories to be told.  I can only hope that Ms. Haines is going to quickly crank out the next in the series.

Since I don’t want to give the plot and surprises away, I will mention a bit more about the series.  H&W Investigation in my opinion is very good Urban Fantasy.  I sometimes have a hard time connecting with this genre, but I did with ease with this series.  Shia is not your normal heroine.  Some people complain about her weakness, but I find her traits more believable than the norm.  She is human, and her actions and thoughts portray that.  She doesn’t instantly become a super heroine.  The buildup is slow and I liked it.  She makes a lot of errors and even at the end of this book she retains her believability for me.

The first two books in the series; Hunted by the Others and Taken by the Others, were not as enjoyable as the last two were for me.  Ms. Haines has definitely picked it up and has improved on the series.  Now with her world building done, she is fully engaged in the plot and it shows.  As a whole I would recommend this series.

You want something new and exciting?  Then you need to pick up H&W Investigations.  This is a wonderful Urban Fantasy series with a teeny tiny touch of romance (it’s barely there).  The action is amazing and the characters are engaging.  When you need something a little different, I would look no farther than right here.

Book Giveaway
Kensington Publishing is kindly giving away the first three books in the H&W Investigations series to one lucky winner!!

(click on the photo if you want to check them out)

Open to US and Canada Only!
Thank you to our sponsor - Kensington!  Be sure to friend them on Facebook and check out their website.


I'm going to throw in something special!
If we top our review giveaway entry numbers record of 232, I'll also throw in my plain cover ARC of Book #4 Stalking of the Others.

a Rafflecopter giveaway
Posted by Toni at 5:32 PM