Thank you Terry and her loyal Blog Followers for joining us today!
Welcome to Paranormal Addicts! 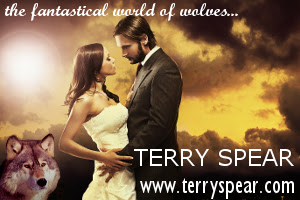 
I admit it. I’m addicted to romance, to happily ever after, to love.


What is more special than a couple finding love? To cherish each other forevermore?To share in the highs and lows of a relationship?


To find love in a paranormal way.


Admit it. The paranormal can be hot and delicious and sexy. The romance can pull us out of the ordinary and place us in the extraordinary. We can fantasize about just how hot a vampire or a werewolf or a jaguar shifter could be.


We can love them, knowing they will love us with a passion no mortal man can give us. Well, some can, but it’s like having a super-being making love to us. Not all powerful, but he’s just, well, out of the ordinary.

And yet, they’re human, too. Sharing the human emotions of sorrow and grief and doubt and fear. In fact, I believe they feel these things in an extraordinary way. They’re not bound by human convention. They can be who they are (well, within reason…a werewolf has to be careful about shifting in a room full of humans, and a vampire living in a society that believes they’re only fantasy has to be careful about showing off his gorgeous pearly whites), but in other ways, they can be real men…in a bigger than life PARA normal way.


So what’s not to love? Just because a guy’s got to run in a fur coat sometimes, or a spotted coat on occasion, or take a little nip at the pulse in your neck, doesn’t mean they can’t be human most other times. And yet that part of them, the paranormal side of them, reflects in their human lives, the way their senses are more highly attuned, the way they can perceive more than mortal men can see, the way they can be more protective and better equipped to act on that protectiveness than a strictly human counterpart. Because they do have those overprotective genes, and abilities that will help them ensure they are there to see that no one else takes advantage of the woman they love, they make a pretty terrific mate. That doesn’t mean that the woman won’t be called upon to rescue a hero in trouble.


The guys are still half human. And even wolves or jaguars or vampires can get themselves into hot water. So sometimes those spunky heroines who ally themselves with them have to help them out.


Not that a strictly human woman can’t throw a paranormal type dude totally off kilter, making him wonder just how he got so deeply involved with someone he shouldn’t. Jake Silver in Dreaming of the Wolf (book 8) comes to mind when he runs into Alicia Greiston, bounty hunter, human type, when he’s strictly all wolf. (To Tempt the Wolf, book 3, Wolf Fever, book 6).

It isn’t that a human is less worthy of having a mate who isn’t all human, but it just gets…complicated. But what if neither are paranormal to begin with? More trouble than they bargain for. Especially when the human couple have to face the paranormal changes and haven’t a clue as to what’s happening. (Legend of the White Wolf, book 4).
Then there are the vampire hunters and the vampires. No way does a huntress of vampires ever want to be one of the hunted. Not that one would take up with a renegade vampire, but still…they’re not acceptable mates whether they’re the good guys or not. Normally. Unless the love bug bites, and then…well, it’s something they have to deal with. (Deadly Liaisons, Huntress for Hire, Forbidden Love, Seducing the Huntress, The Siren’s Lure, Vampiric Calling).


What about the jaguar shifters? Well, the first has to do with a jaguar shifter, his sister, and a human woman who keeps intruding on his life. And he’s falling hard for her. But being the paranormal kind of guy he is, heroic to a fault, no way is he changing her. (Jaguar, book 1, Fall 2012). 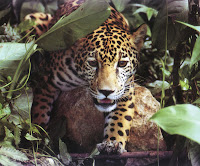 All of Terry's Upcoming Releases

And that’s the whole story—from my PARA normal point of view!


Hope you all are having a lovely holiday season!


Oh, and what do you think of a paranormal gal who targets a hunk of a guy—human kind—for her own? Or do you prefer it the other way around, when one of them is human?


“Giving new meaning to the term alpha male where fantasy IS reaility.”
www.terryspear.com


Award-winning author Terry Spear is the author of urban fantasy romances and medieval Highland romances. She received Publishers Weekly's Best Book of the Year in 2008 for Heart of the Wolf. A retired officer of the U.S. Army Reserves, Terry is a librarian by day. She lives in Crawford, Texas.

Click here to read even more exciting things about Terry.

Thanks so much for having me on your blog, Chelsea! I'll be giving away a copy of Dreaming of the Wolf, or a different book, winner's choice. US only.


Please leave a comment below for your choice of Terry's fabulous books!!  Please be sure to include your email address, so she knows how to contact you.

Heart of the Wolf--Publishers Weekly "Best Books of the Year!"
"Giving new meaning to the term alpha male where fantasy IS reality." www.terryspear.com