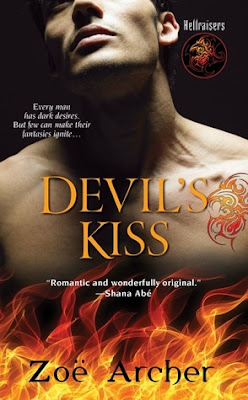 1762. James Sherbourne, Earl of Whitney, is a gambling man. Not for the money. But for the thrill, the danger—and the company: Whit has become one of the infamous Hellraisers, losing himself in the chase for adventure and pleasure with his four closest friends.

Which was how Whit found himself in a gypsy encampment, betting against a lovely Romani girl. Zora Grey’s smoky voice and sharp tongue entrance Whit nearly as much as her clever hands—watching them handle cards inspires thoughts of another kind...

Zora can’t explain her attraction to the careless blue-eyed Whit. She also can’t stop him and his Hellraisers from a fiendish curse: the power to grant their own hearts’ desires, to chase their pleasures from the merely debauched to the truly diabolical. And if Zora can’t save Whit, she still has to escape him…

Watch out London!!! The Hellraisers are in town.

The Hellraisers are five friends hell bent on NOT conforming to societies rules. Each fierce in their own right, but together they will be unstoppable.

This is the beginning of what promises to be a great series. I love the originality of the plot. I personally have not read anything like this, but that really doesn't say much.

This series begins with the story of James “Whit” Sherbourne, Earl of Whiney. His vice in life is gambling. He lives for it day in and day out. No time for romance, parliament or even his vast estate. The thrill of winning and losing is everything. Lately, even gambling has become mundane. Whit has to take larger risks to get the same feeling of elation that he used to get with simple bets. He may not know it, but he just wagered his largest pot ever, his soul.

From the moment Zora Grey set eyes on Whit, she is awestruck. Zora is a gypsy and she has met many gorgios in her life, rich white men with nothing good to do with their time. There was something different about this man and something that attracts her heart and soul. When the fates send her a message, she can only do one thing…fight for Whit’s soul and very likely hers too.

Whit can now control probabilities, a handy power to have for a gambler. Zora has other plans though. She never believed in the power of the cards but they told her that evil is coming and she will not allow it to take over the world or Whit. Together they battle each other and the forces of evil. Their passion is steamy in and outside of the bedroom. I enjoyed their chemistry and their unlikely love affair. This is smoking romance at its best. Though the sex scenes were slow coming, once they commenced they were scorching and burned up the pages.

The story building in the book is solid. I could see the foundation of the series being built for later novels. That is a common problem with first novels in a series. They have to work so hard to set the stage. Ms. Archer did a fabulous job and now she can hit this series running. My only disappointment in this book is that I have to wait to see what happens with the other Hellraisers.

Devil’s Kiss is action filled with Zora and Whit’s clashing personalities. Ms. Archer makes the story more exciting by throwing in some demons and other hellish creatures. Nothing keeps a couple of people busy like trying to stop a devilish being from turning the world into his own private hell.

Let Ms. Archer take you along on a new journey. It is a hot ride but she will be serving a lot of titillating refreshments and she promises oodles of exciting entertainment. All Aboard!!