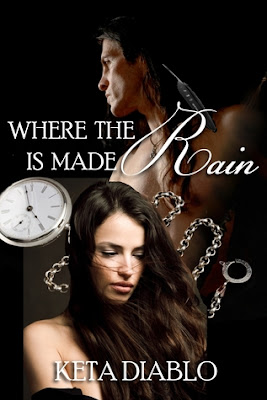 A decadent-looking savage has captured Francesca DuVall and her brother, Marsh. Now she must spend every waking moment planning an escape. She didn’t count on the powerful draw of desire interfering with her scheme in the camp of the brutal Cheyenne dog soldiers.

Ethan Gray is a curator at a national museum...most of the time, but when he travels through time to help his beloved People he becomes Meko, leader of the most revered and feared tribe of the plains. Although their worlds are decades apart Meko can’t resist the dark beauty he kidnapped during a raid. He has many battles to fight but none he wants to win more than the one that will capture Cesca’s heart forever.

From the windswept plains of Colorado and the harsh life of a Dog Soldier to the placid life of a curator their love was fueled by passion and kindled by destiny.

Welcome to the world of time travel. Hold on tight because we are going to soar into the clouds and delve into the amazing world of the People, the Cheyenne’s.

Francesca Duvall had a quiet life taking care of her father and her younger brother, Marshall.  All that changed in an instant the dog soldiers descended onto her home and killed her father.  Now she and her brother are prisoners of savages and her only goal is to save them both or at least her brother no matter what she must do.

Ethan Gray is a man with a mission to save his People.  He is devoted to their existence and to protect their way of life.  He is a Wanderer, a man destined to travel through time to protect the Cheyenne.  He is a modern man living in the past, sacrificing his own happiness for the good of the People.  His current mission is to save his tribe from being massacred.  He never anticipated finding his heart and soul in the eyes of a frightened woman.

Their love is forged on blood, pain and honor.  Two people who are from different times and different worlds.  Together they must protect their hearts, each other and the People.  These were violent and turbulent times and this is their story.

I think this story can be considered a “lite” paranormal.  He is a shapeshifter, but only when he travels thru time.  He seems to be semi-immortal.  I got the impression that he gets to decide when he wants to die, beyond that this is a time travel historical.  While Ethan is a contemporary man, most of the story takes place in the past.

Due to Ms. Diablo’s storytelling I wanted to learn more of the Cheyenne and dog soldiers.  She pulled me in with vivid descriptions and intense scenes.  She made my heart break reading about their history and their devotion to family.  I felt like I was transported back into time and was living on the plains with these great people.

Where the Rain is Made is rich in detail.  You can almost see and taste the scenery with Ms. Diablo’s descriptive and well written words.  You are immersed into the dog soldier’s world and transported into the exciting and frightening life of the People.  While this is a lite paranormal read, I still considered it time well spent; time that was enjoyed and will hold a place in my heart.  The People are now a part of me and I thank Ms. Diablo for sharing their rich but tragic existence with me.

Don’t miss Where the Rain is Made.  Action, passion and history merge together in this gripping tale.  I hope that there are more stories of the Gray’s adventures.  I plan to be first in line to get the next installment.