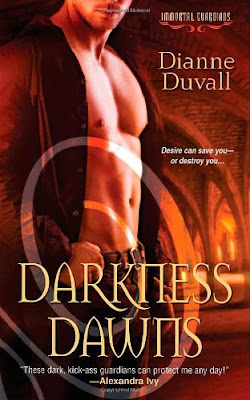 In this dazzling, sensual novel, Dianne Duvall beckons readers into a world of vampires, immortals, and humans with extraordinary gifts. . .where passion can last forever, if you're willing to pay the price. . .

Once, Sarah Bingham's biggest challenge was making her students pay attention in class. Now, after rescuing a wounded stranger, she's landed in the middle of a battle between corrupt vampires and powerful immortals who also need blood to survive. Roland Warbrook is the most compelling man Sarah has ever laid hands on. But his desire for her is mingled with a hunger he can barely control. . .

In his nine centuries of immortal existence, no woman has tempted Roland as much as Sarah. But asking her to love him is impossible--when it means forfeiting the world she's always known, and the life he would do anything to protect. . .

You may not know this, but it is true.  It is actually a rare virus that once contracted causes an intense craving for blood and will eventually lead to madness.  There is the extreme rarity that if you are one of the lucky ones that have “special gifts”, the virus mutates.  If that is the case then your “gifts” will improve and as a whole you become more than expected, basically immortal.

So there are things that DO go bump in the night and you need to be careful out there.  On the plus side, the “special” individuals are out there to protect us.  They call themselves Immortal Guardians.  Be very thankful that the Guardians are out there because something sinister is in the air.  The vampires are changing their patterns and things are not looking so good for us humans.

Roland Warbrook has been an immortal for over nine centuries.  In all those years he has learned a few things.  One of them is that people can’t be trusted.  The only person you can trust is yourself and that is why he tends to be by himself.  The other Guardians have dubbed him as antisocial.  One of Roland’s best lines is, “I’m not antisocial.  I just want to be left alone.”  His world is turned upside down the moment he actually plows into Sarah Bingham.  Tall, dark and deadly is captivated and bewildered by Sarah.  She is a little spitfire and while she maybe small she knows how to handle a crisis and a gun.  Now HE doesn’t know what hit him!

Sarah lives a quiet life in North Carolina.  On a quiet, VERY early morning, minding her own business trying to prepare a garden plot, Sarah is literally ran over by what she suspects is a bear, a bear in North Carolina???  Her assumption can’t be further from the truth and in an unexpected turn of events, she takes matters into her own hands and saves Roland from certain death.  Now her life is filled with danger, death and…vampires?

The story of grumpy Roland and resourceful Sarah is funny, sexy and exciting.  Darkness Dawns has non-stop action and once the two of them fall into bed, watch out and be prepared not to get anything done.  Ms. Duvall captures your imagination and doesn’t let go.  While the story of vampires has been told a million different ways, she has developed a nice new spin to it and I found it extremely thrilling.

If you love vampires then Darkness Dawns can’t be missed.  Fast paced action, sizzling love scenes, snarky kick-butt characters and smokin’ hot men.  What more can a girl ask for?  Well she could ask for an Immortal Guardian all for herself.  Well get in line ladies, this girl is first in line!

Thanks for reading!! - Toni

NOW FOR THE GOOD STUFF!!

Kensington has been very generous and is giving a book away.  Please click on the book link below for your chance to win this great book!