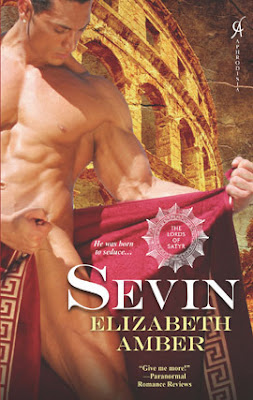 Lord Sevin Satyr indulges freely in the delights of the flesh within his infamous Salone di Passione, the talk of 1880s Rome. Surely the Humans who would deny his kind their pleasures can be persuaded to share them in a new Salone he plans just for them—above all, the beautiful Alexa Patrizzi. Fiery and spirited, she is made for sin…

Sevin’s younger brother Lucien possesses powers he cannot control. Held in the Roman catacombs as a sex slave until he was eighteen, he finds refuge in the ElseWorld—and sexual healing in the arms of Natalia, a maenad, who thinks Luc too beautiful, too young for her. But when his mirrored eyes heat to molten silver at her touch, she can only love him more…

I can officially say that Ms. Amber is consistent!  Sevin is panty melting hot, but she followed her pattern that she started with the first set of satyr men (books 1-4), ending a series quickly and abruptly, but in a good yet frustrating way.

Sevin is the brother that was always left behind.  Many years ago, his parents died and he also lost his three brothers.  Left alone at a very young age, he wondered and tries to understand his existence.  Too young to understand his heritage, his coming of age had dire consequences that marked him for life.  Now all his brothers are home, but his brother Lucien is broken and Sevin is determined to be there for him; even if that means he has to remove the one woman that makes his blood burn.

Alexa Patrizzi has nothing.  She lost her mother and brother months ago, but after what she learned about them, she is not so sure if that is such a bad thing.  She runs to Venice to escape their evil doings and has now returned to her home in Rome.  Alone and scared, she is barely holding on.  To protect Lucien, Sevin Satyr wants her gone from Rome, but she has nowhere else to go.

Their attraction is almost visual, but after the pain that her family set upon Lucien, Sevin can’t pursue Alexa.  He needs to get rid of her and fast.  Fate has other plans.  These three people are thrown together, forced to endure.  One night will change everyone and everything.

Lucien is more confused than ever.  His hatred for the Patrizzi family has fueled him and now revenge is out of his grasp, but there are more pressing matters at hand.  A new travel embargo has just cut off the Satyr Lords from their supply of life saving grapes.  Not to mention the arrival of a fountain has a strange but strong pull on Lucien.  One touch and he is gone.

Natalia is oddly attracted to the godlike statue.  She doesn’t dare to look or even touch it.  The beautiful statue suddenly appeared at the temple over a decade ago and has been worshipped and revered ever since; seen as the savior to save their dying lands.  WHO WAKETH HIM, SHALL SAVE OUR LAND.  One stumble and touch later and Natalia has given her people hope, but she has also sealed her fate.

Lucien wakes to find a beautifully alluring woman pleasuring him.  She is touching him, but for someone who despises to be touched it is a strange yet wondrous experience.  He doesn’t trust these feelings though.  Now after years of torment he is a prisoner yet again and is forced to comply with his captors, but he senses his last remaining enemy nearby.  Lucien will get his revenge if it is the last thing he does.

Forced together, they find comfort.  Can her training as a healer save Lucien?  Can he get past his fears and allow love into his heart?  These two broken people need each other and together they can find happiness.  Can Lucien return to his brothers and save them before the next full moon?

These two short stories blend beautifully together.  They flowed seamlessly from one to the other.  All-in-all I’m satisfied with Sevin.  Would I have wanted longer more detailed stories for these two brothers?  Yes.  Would I have missed out on their stories?  No.  I have mixed feelings about this novel.

Are you confused yet?  Well if you read the about the Tuscan Satyr’s you would be up-to-date, but not to worry, I’ll see what I can do.  Ms. Amber has written seven books of the Satyr Lords and her seventh book is smartly titled Sevin.  Books 1-4 are about the Tuscan clan set approximately 60 years prior to the Roman clan.  The first four books do not need to be read to enjoy books 5-7, but Ms. Amber has written an amazing world so I personally wouldn't want to miss out on them.

Her consistency that I mentioned earlier is this; she wrote full novels for the first of the brothers, but for some reason she has ended the sub-series by combining the last of the clan into one final book.  So book four had two characters short stories and so did Sevin, book seven.

Book four titled Dominic, also contained Vince’s story.  These characters really could have held their own novels, but their short stories were still very enjoyable reads.  This can be said for Sevin too.  Sevin and Lucien are two brothers I really wanted full novels written about.  I did not expect their books to be combined and because of that, I am disappointed.  Being titled Sevin, I truly expected it to be solely his own.  Both of these men didn’t deserve to be swept under the rug and be quickly wrapped up.

Even though Ms. Amber did combine their stories, their short stories are still very good.  They do feel rushed, but they are filled with love, lust and suspense.  These are well written books that really need to be enjoyed.  The Satyr Lords are amazing virile men with lots of love to give.  I enjoy Ms. Amber’s world building, her characters are amazing and the storytelling is fantastic.  These novels are not for the timid at heart though.  The Aphrodisia line of Kensington is very erotic and explicit, so be prepared for many steamy sex scenes that will leave you breathless with your heart pounding.  I love these novels and I hope Ms. Amber continues to enchant us with many more tantalizing satyr men.

Book Giveaway
Kensington Publishing is kindly giving away one (1) copy of: 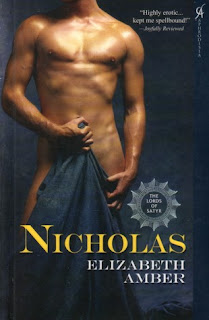 Thank you to our sponsor - Kensington!  Be sure to friend them on Facebook and check out their website.


You can also visit their Facebook app to find some great contests and excerpts, along with polls and quizzes about their books. The direct link to the apps are here:

Rules for this giveaway are listed in the terms and conditions. By entering you are agreeing to adhere to them.
Posted by Toni at 12:01 AM