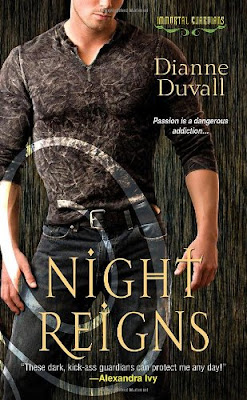 Ami isn't much for trusting strangers. She has a hard time trusting anyone. But she's no coward, and she's no pushover in the protection department either. So when she comes across a mysterious warrior taking on eight deranged vampires on his own, she doesn't hesitate to save his bacon. Of course, that was before she realized what one little rescue would get her into . . .

Marcus Grayden has been an immortal protector of humanity for eight hundred years, and at the moment he's not interested in backup. From the moment Ami arrives in his life, he can't deny that she's strong, smart, and extremely skilled at watching his back. But she's also destroying his protective solitude and stirring desires he can't bear to awaken. After all, whatever her secrets — how can she defeat death itself?

Ok two days and two books and on the third day, let there be reviews.  Yes, I have done nothing but devour these two novels.  I have been captured by this amazing new universe and I am officially in love with the characters.  They feel like friends that I could cherish forever.  Yes, I will admit I love my fictional characters.  I know I’m not the only one out there that would love some Hunters or Brothers.  If you are like me, you know EXACTLY who I am talking about, so no mocking.

Marcus has lived a long time, over eight hundred years.  In that time, he has loved only one woman, Bethany, a woman that was destined to never be his, but to eternally break his heart.  In his whole existence there has only been her.  Having her in his life platonically, not once but twice, was all he could ever have.  Now he has lost her for the last time, eight years ago.  His chance to ever find love has disappeared forever.  All that changed the moment he set his eyes on a fiery red head that had talent with a gun and the ability to set his pulse racing.

Not unfamiliar with the world of vampires and Guardians, Amitiska, “Ami”, isn’t surprised when she comes upon a scene of chaos, an Immortal Guardian taking on eight vampires.  What does surprise her is the awestruck brilliance of the man himself; long dark hair, vibrant amber eyes, and full sensual lips.  She is left speechless.  Too bad it won’t be the first or the last time in one night for her.  She is shocked again later that night when she is assigned to be his Second, a human personal assistant and guard for an individual immortal.  Wow, she didn’t see that coming!

Attack after attack, Marcus and Ami begin to work together in synchronicity and harmony.  Too bad their inner feelings are getting in the way.  Both are falling for each other and are unable to control the new urges that are burning within them.  Ami is constantly surprising Marcus with her abilities and courage.  She is more than she appears, but she is terrified to lose him to the truth.  Can they build a relationship that will last forever if she is not able to trust him with who and what she is?

Ms. Duvall has actually improved from the first story, and I gave Darkness Dawns a 5 star rating.  So what does that make this one, a 5++ star story?  She is keeping it exciting by revealing some secrets but not all of them.  Truthfully I am not sure if I love that or not.  The “long story” still has not been exposed, but a bit more is known.  Seth, the leader of the Immortal Guardians, is a mystery that will likely not be uncovered anytime soon too, but we did get a glimpse of his background.  Ms. Duvall you are such a tease, but a very good one!

This woman can’t write fast enough for me.  We need to form a posse and catch her and tie her to her desk and make her get busy.  You hear that Ms. Duvall – chop, chop.  From online posts it doesn’t look like we will get another novel until October 2012, *sob*.  But please don’t let that stop you from reading this awesome series.  Just think of how many times you can reread and enjoy the boys by next fall.  I mean seriously, this will be a repeat read for me.  A keeper all the way!