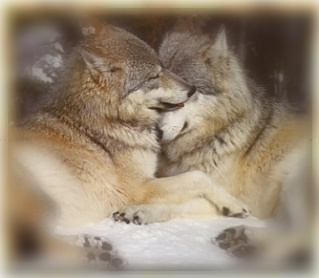 Romancing the Wolf
By Terry Spear

At least that’s what Meara says when Finn tells her he’s not a romantic kind of guy. But you see, there’s romance and there’s ROMANCE.

Which would you prefer? A man who takes you out dancing and out to dinners, but when he wrecks the car and breaks your ankle, he leaves you sitting in the hospital waiting to see a doctor, alone, because…he felt so badly about it? True story, my mother’s when she was in her twenties and the guy was her fiancé. End of relationship. What would happen if after they married, she got pregnant, she wondered. He’d run off after dumping her at the hospital because he felt so badly that he caused it and she was in pain again?

So definitely, there’s got to be more to a relationship then just the dating scene. The guy can’t run off and leave the heroine at the first sign of danger.

Shooting starts, Finn tackles Meara to the floor, loses his towel, and his naked body is pressed against her clothed one. Meets criteria of protecting heroine?

He has to be willing to take risks for the heroine. They’re being tailed, he’s thinking her clothing is bugged, he gives her much more than a once over…searching for the bugs, and she’s thinking he’d better find one or else. Wolfishly heroic?

She’s hungry, he fixes her a steak on the grill, moonlit night on the beach, but it doesn’t stop there…he makes her s’mores, because she has a love for all that chocolaty marshmallowy graham cracker delight, and he loves to see her enjoy them. It’s not about him and what he’d love, but about her and what she’d love. Sitting in a crowded restaurant isn’t half as romantic as this getaway with him, while danger lurks everywhere. Romantic?

Wolves are territorial. It doesn’t matter if some other wolf might be trying to help Finn out with protecting Meara. There are wolf rules that need to be honored. You don’t break into a safe house and fix yourself a cup of coffee, but it’s more than that. It’s the fact that Bjornolf (pronounced Bee-your-nulf), might be scoping out your she-wolf, and that’s not going to be allowed. Bjornolf doesn’t even know what hit him, Finn’s so fast to react and set the rules. Some wolves are too stubborn to take a hint though. Protective?

Finn had arrived to protect both Hunter and Meara from the threat to the SEAL team after having contacted the other members of their team. But Meara’s the only one who’s on her own, and fearing she’ll be targeted to get to her brother, Finn is determined to see her safe. Even though he’s way over qualified for a wolf-sitting job. Loyal?

Bedtime can be a whole ‘nother experience. Things are getting way too hot between Meara and Finn, when they both know this isn’t a good idea, so she opts to sleep on the couch. He doesn’t want her that far away when he’s supposed to be protecting her. She places pillows between them. There’s not enough room for him on the bed. The pillows go on the floor. Decisive when decisions are important?

Okay, so alpha wolves are hot and live by different rules in our society, but who wouldn’t want to be romanced by a SEAL like Finn??? Sure, you might not get a Valentine’s Day card, and he might balk about a honeymoon, but the showers you share can make up for it all… SEALs LOVE the water.

Hope you enjoyed a romp with a SEAL-wolf, who, by his own admission, doesn’t have a romantic bone in his body, but his actions tell a whole different story.

Terry Spear has written over a dozen paranormal romance novels and two medieval Highland historical romances. An award-winning author, Terry’s Heart of the Wolf  was named a Publishers Weekly’s Best Book of the Year in 2008. A retired lieutenant colonel in the U.S. Army Reserves, Terry Spear is a librarian by day and spends every spare moment writing paranormal romance as well as historical and true life stories for both teen and adult audiences. Spear lives in Crawford, Texas, where she is working on new paranormal romances! For more information, please visit http://www.terryspear.com/.

You can also visit Terry at: 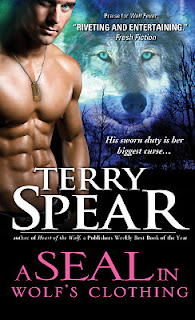 
We are so excited here at Paranormal Addicts!!  Sourcebooks is offering TWO copies of A SEAL in Wolf's Clothing for this giveaway.  So that means there will be Two lucky winners!!

Paranormal Addicts would like to thank Terry Spear and Sourcebooks for being so generous with their time and prizes.  Please checkout their websites, they both have great books to offer!

To enter:  Answer this question:  How do you like to be romanced?

To earn additional entries:  These are not mandatory, but do increase your odds of winning.


a Rafflecopter giveaway
Posted by Toni at 12:01 AM