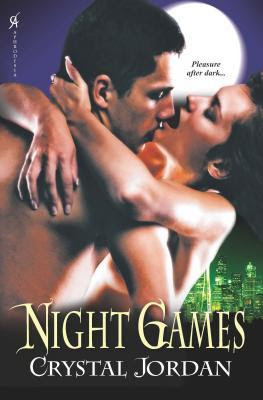 Over time, the Magickals have learned to live in the company of humans and keep their extraordinary abilities a secret. But despite their vigilance, one lurks among them who will stop at nothing to obtain his dark desire. . .


A cop with the Seattle P.D., Selina Grayson is committed to both her job and her privacy. Few know that she's a centuries' old elf with a tragic past that continues to haunt her. Yet her body still craves the exquisite ecstasy of sex that is her birthright--and a night of complete sensual abandon is just what she needs. . .


Read an excerpt from Night Games.


Selina Grayson is an elf and she is over four hundred years old.  She has done everything she has ever wanted to do in her long life.  She has been married, widowed, had several careers and has seen the world.  For a year now, she has known that her death is impending.  All Magickals have a life span of approximately five hundred years, but that is not why her time is up. Selina’s ex partner, Merek, has seen her death in a premonition.  It is really too bad she has finally started to live again.

From the moment Selina agreed to have a one night stand with Jack Laramie, her very existence started to change.  He is a human in the same boat as Selina; neither of them wants to form a bond with the other.  Their attitude to keep it “friends with benefits” goes well beyond them being partners to solve a crime.  They both have tragic pasts that are painful and better left buried.

Someone is killing Magickals and Normals.  Selina and Jack are in a race to find the killer before he/she strikes again.  As the case they are working on heats up so does their passion.  The secrets they have kept buried begin to surface and they must work through their problems to solve the crime and their inevitable infatuation with each other.  Can they change fate or is Selina’s death going to ruin their future?

First off let me say Night Games can be read as a standalone but is also considered book two in the Night series.  You will find the first “couple” of the series mentioned in this story.  If you are interested in Chloe and Merek’s story, be sure to pick up book one, Embrace the Night.

I have warm and fuzzy feelings about Night Games.  I had the same outlook when I read Embrace the Night.  There is just something about the series that was delightfully natural.  I know it’s an odd word to use for an erotic romance novel, but it just works.  The writing is smooth and easy to follow.  The story is well told and the characters are fun to interact with.  Ms. Jordan wrote a captivating novel that is relaxing, sexy, and engaging.  She did a remarkable job not revealing any of the plot secrets.  I was on pins and needles and had some suspicions about the identity of the killer, but I was wrong.  Perfect execution!

Night Games has it all; an amazing plot, enjoyable characters, a bewildering mystery, a touch of action and scorching sex scenes.  Her world building is believable and very consistent.  She makes you wish you were a part of their universe.  So grab this great effortless read and take a breather from the craziness of life.

Don't forget to check out my review of the first book in the series.