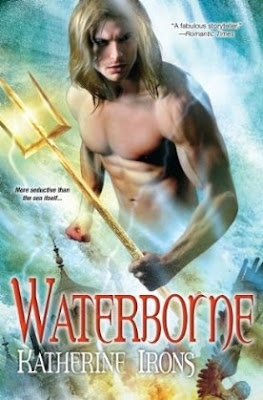 A Force of Nature

Ree O’Connor is more than she seems to be. Despite her delicate appearance and her broken heart, she sees what others don’t. In fact, she is an agent of a clandestine world court, about to bring down a monster when a stranger springs her trap instead. The mistake nearly costs Ree not only her prey, but her life, too—until mysterious Alexandros spirits her to an underwater world she never suspected, even with all her secret knowledge.

As a prince of Atlantis, Alexandros has centuries of experience in love and battle. His magic draws from the power of the ocean itself, and he can be just as beguiling—and just as unfathomable. Could any man heal Ree enough to become more than a sometime lover? And can she trust her heart to a soldier-prince of the deep?

I have wanted to read this series for a while now.  So I jumped at the chance to read the third book in the series, Waterborne.

Alexandros has watched both his brothers recently fall for human women.  Humans have never done much for him, but for some reason Ree stirs something in him.  At first glance she seems like an unassuming woman.  She also seems to be in the wrong place at the wrong time.  Only Ree is not what she appears.

From early childhood, Ree’s life has been shaped and controlled by a secret agency.  She was never a normal child and upon the death of her parents she has been in training to be more, much more.  She is a proficient killer.  Even though she knows there’s a different side to the world, she never expected to find a new dangerous world underwater.  Now she must trust a man to save her life, but the last time she trusted and loved a man, he died.  She will not allow that to happen again.

Alexandros is an assassin.  He has protected his family and Atlantis for countless years.  His current assignment is no different; kill a man found guilty of crimes against nature.  But when things go horrible wrong, he is forced to save a human.  Intrigue, deception and danger are around every corner.  Alexandros is now in a race to save Ree and the kingdom.

I think what helped this novel was Ms. Irons’ choice to spread the story amongst more than just the main couple.  There is a lot going on in this series and it was nice to see how some of the plots from prior books played out.  While all three brothers have found their mates, I am actually unsure if this series is complete.  It does have a finished feel to it, but the window for more is there.

The story in general was fine.  Nothing fantastic, but it was still engaging.  I had that feeling with most of the series.  There was just a little spark that was missing to make it great for me.

For instance, Ree never lived up to her title.  She was supposed to be an unparalleled assassin.  I just couldn’t see it.  She had a strong presence, but her skills were never really highlighted.  Yes, a majority of the book she was trying to survive, but when push came to shove, I expected more.

Alex was very heroic, but he took a bit to warm up to.  It even took Ree awhile too.  I enjoyed him, but he was just ok.  Morgan is probably still my favorite of the brothers.  I will say, without giving anything away, Morgan made the right choice in my book.  Alex is perfect for the job!

While their love story was pleasing to read about, their adventures were more enjoyable.  I was actually hoping they would be more involved with some of the other background battles that were going on, but it was not meant to be.  Ms. Irons has written a unique underwater world.  If you crave a new paranormal world, this series might be for you.  The creatures are diverse and she has developed a fascinating universe that is right under our noses.  I do have to give her credit for her colorful and amazing abilities to world build.

Personally, I think Waterborne does not stand alone.  There are too many details that are enhanced by having the back story.  I feel it is necessary to read the prior books to fully appreciate this novel.

Ms. Irons has taken the tale of Atlantis into a remarkable new direction.  It is distinctively hers and for anyone who enjoys oceanic tales, Waterborne and this series might be for you.

Kensington Publishing is kindly giving away the first two books of the series:

Open to US and Canada Only.
Thank you to our sponsor - Kensington!  Be sure to friend them on Facebook and check out their website.


I am going to sweeten the deal!!
I have an unread copy of Waterborne to add.  So you will have the complete set!!