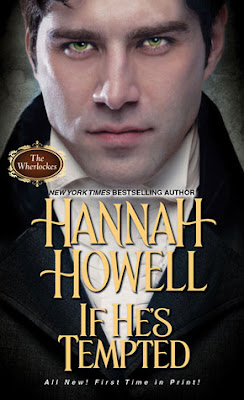 Lady Olympia Wherlocke has the gift of foresight. When Lady Agatha Mallam asks Olympia to locate her brother so he can rescue her from an arranged marriage, she knows exactly where to find Lord Brant Mallam, Earl of Fieldgate. What happens next is something she never envisioned…

Since his betrothed died, Lord Brant Mallam has drowned his sorrow with wine and women. His dissolute ways have only emboldened his calculating mother. But with the help of the enchanting Olympia, he concocts a daring plan to end his mother’s devious designs for his sister. While each step in their bold scheme works to perfection, the sins of the past could unravel a growing desire that neither Olympia or Brant can control…

In my opinion, If He’s Tempted is a nice change from the normal historical.  With a touch of the paranormal, a dastardly evil villain and steamy sexual undercurrents, I enjoyed myself from start to finish.

The Wherlocke / Vaughn family have been outcasts for many generations.  They sit on the edge of society; actively participating, but weary of the ton.  Lady Olympia became a widow at a very young age and doesn't allow the ton dictate her comings and goings and when someone weaker asks for help, she is the first to help.  Though she knew helping the young Lady Agatha could cause her problems, she didn't know the extent of the evil involved.  She also didn't expect to have feelings blossom for Lady Agatha’s brother, Lord Brant Mallam.  She has never felt the urges she experiences when she is around him.  With no experience to fall back on, she is excited and apprehensive to follow through.  But first they need to save his sister.

Lord Brant is a man filled with so much guilt; he is basically drowning in it.  He recently discovered that his betrothed didn't leave him for another man, but was sold to a brothel and killed.  He doesn't know how he can rise above it all.  Now he is slowly discovering that her death is a long string of crimes showering down upon his head.  Nothing is his fault, but his guilt is getting deeper and deeper.  His only light is Lady Olympia.  She is bound and determined to fix all the wrongs and he will be by her side to help her, even if it kills him.  It is the least that he can do since he has allowed these crimes to go on for so long.

The evil deeds keep piling up and time is of the essence.  How to you bring down a prominent person in society, without ruining the innocent members of the family?  With the help of Lady Olympia’s family they are making progress, but in the final fight all might be lost.  We can only hope these two lost souls are strong enough to persevere.

For me, historicals can sometimes be ordinary.  They are still fun to read, but they tend to be the same thing; headstrong heroines and rakish heroes, who find true love while circumventing the brutality of the ton.  If He’s Tempted is all that and much more.  You got a villain that is utterly shocking in their evilness, a ragtag family that is filled with every no-no known to society and two extremely determined people trying to find the truth.

If He’s Tempted is a big improvement from the last installment in the series, If He’s Dangerous.  I expected more from Argus Wherlocke’s book and Ms. Howell didn't deliver for me.  She more than made up for it with Olympia’s story.  I've been enjoying her presence for several books, and it was wonderful that she got a strong plot and a great man too.  It was also nice to get Olympia’s backstory.  Wow, and what a shocker.  I didn't expect it at all.

I am very pleased with If He’s Tempted.  I have renewed faith in the Wherlocke series and will be waiting patiently for the next installment.  This is a very big wonderfully exceptional family with many stories to tell.  They are a breath of fresh air in the stuffy world of the ton.

I am giving away my never before read plain cover ARC of
If He's Tempted.


a Rafflecopter giveaway
Posted by Toni at 11:04 AM