Toni's Review of My Lord Immortality by Alexandra Ivy ***3 Stars*** 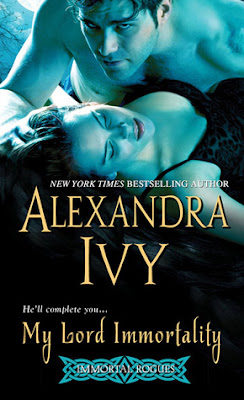 In this mesmerizing tale from the author of the Guardians of Eternity series, a traitorous vampire is determined to destroy the Veil that has long separated vampires from human blood—and the passions it ignites. Only the Immortal Rogues, three vampires charged to protect their kind, can hope to stop his deadly rampage...

Amelia Hadwell has no time for London's nightlife. Not when her beloved brother’s odd ways have their family threatening to institutionalize him. And not when she is questioning her own sanity after being confronted by a murderous shadow creature—then being saved by a captivating stranger, a man who belongs to a world she cannot imagine.

Reserved and scholarly, Sebastian St. Ives has been content without human desires—until they are reawakened by the delicate, brave Amelia, whom he is meant to protect. For the young woman has no idea she possesses the key to a ravenous vampire’s dark victory. Now Sebastian must shield her from both a killer and his own growing attraction—or bond with her completely, and forever...

In the final chapter of this trilogy we meet Amelia and Sebastian.  Amelia is an amazing woman that has decided to take a different road than the expected.  Rather than marry well and live the society life, she decides to take care of her mentally challenged brother.  She leaves the life she knows and builds a stable home for him in the more affordable, seeder part of London.  William keeps Amelia constantly busy, but she enjoys and loves him dearly.  Her main concern is keeping him safe, but one night when she is trying to locate him after one of his late night jaunts her life changes forever.

Sebastian is not really sure if he is up for the job of guardian.  He is a scholar first and is unsure how he can protect his charge.  His feelings change the moment he first protects her.  There is a pull within him.  She draws him out of his norm and brings him back to life.  He hasn’t felt this way in centuries and he’s not too sure if he likes it.  He must do his duty to his people, but his heart is telling him Amelia means much more to him.

Sebastian must protect Amelia against the traitor Drake.  Unknown to Sebastian there are other forces working against him.  This is evil’s last chance at the amulets and they are starting to get desperate.  The time has come for the final showdown.

I would like to say that the story is different from the others but it really isn’t.  While every story was slightly different, they were just too similar to me; same template, different names.  But considering that the trilogy evolved around three maidens, three guardians and their chore of protecting the amulets; potential plots are very limited.  Ms. Ivy did pick some wonderfully strong women though.  Each and every one of them have qualities that are not normal for their times and for me, they made the stories.

The vampire universe that Immortal Rogues entails is very sedate.  These are not sexually charged men.  Their lusts have been dormant for too long.  In My Lord Immortality there is no sex and very little sexual tension with only a few kissing scenes.  I would not feel bad letting a teenager or my grandma read this book.  With that being the case, the cover is very misleading.  It screams – sexy road ahead and it did not deliver.  My Lord Immortality is one of the least sexual stories that I have read in a long time. I have read YA’s with more romance.  Doesn’t mean that it is a bad thing either, but I think it would have enhanced the story.  The plot was very one dimensional and it needed some special nuances to make it shine.

My Lord Immortality is an average read for me.  I would only recommend it to people who like their romance light and the plot even lighter.  I will say though that it is nice to have the whole storyline complete.  Ms. Ivy wrapped it up quickly but nicely.  There are no loose ends and I can’t see this world being revisited.  It is a complete package.

NOTE:  These novels are being rereleased under their original titles.  They were originally published in early 2000’s.


Review of Book One in the Immortal Rogues Trilogy! 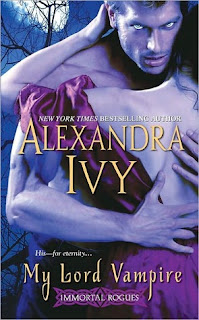