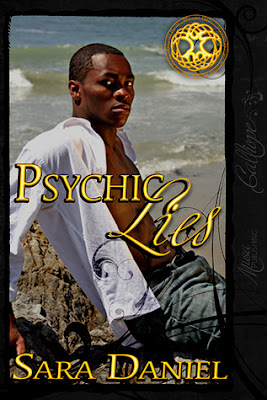 Fiona must keep her ability to read minds during sex a secret from those determined to exploit her, especially a sexy truth-finding investigator who needs her psychic power to save his job.


Fiona has spent her life hiding her sexual mind-reading power at the risk of being exploited by the government. Instead, she pretends to have lifebond vetting powers like the rest of her family. When her fake power results in the death of an innocent woman, her life of lies unravels and she retreats to the Wiccan Haus.


Armando is the head of the Department of Truth-Finding for the Syndicate. To prove his unit’s worth to the government, he follows Fiona to the Wiccan Haus to expose her as an infiltrator of an enemy faction. The truth about Fiona is even more valuable to his people and his career.


Fiona uses her power to seduce Armando and stop his plans to betray her. But nothing is strong enough to keep her from falling in love with this man whose power threatens to destroy her. Now she must trust him, not only with her life and her psychic lies, but also her heart.


If you like shorter stories, written by a variety of authors and enjoy reading about paranormal beings set in a fantastic location, then Wiccan Haus is for you and now is the time to jump on board.  This shared-world series is still in its infancy, but there are enough volumes to keep you busy and interested.

In this installment we have two people coming to Wiccan Haus to find closure, but for way different reasons.  Both are there because of their perceived mistakes and failures.  Fiona is running from herself and Armando is trying to find the truth and save his career.

I really enjoyed this story.  WOW!  I went in without reading the blurb, so I had no idea what Fiona’s secret ability was.  When it started to show itself, just the implications of two people coming together who could read the truth from others, is mind boggling.  Could you imagine having your lover know all your secrets/thoughts and you knowing all his, ALL THE TIME!  Nope, no thank you.

The romance progression was nice, but since their relationship started with so many complications at times it was hard to believe, but Ms. Daniel resolved all my questions and made it work.  She also did a fabulous job with tying up the loose ends.  It just amazes me how authors can package so much story into such small packages.  I am completely satisfied and have no questions that these two found their happily ever after.  I will say though, even though I’m satisfied with the outcome, I’m excited that there are three more stories for me to read in the Wiccan Haus series.  Bring them on!!


Below are my reviews of the first four books in the series!