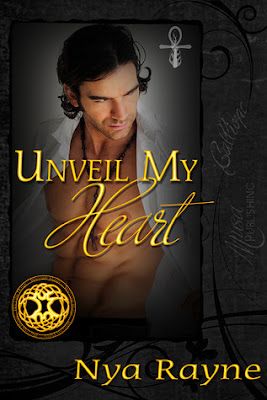 Death is a glorious thing when one can find a reason to live in spite of it.

I have roamed the earth for over three millennia alone, secretly hoping to one day find the other half of my soul. The one woman who would make my deadened heart beat once more. I never imagined I’d find her in a bloodied heap beneath the claws of a despicable Yazaron, the bane of my existence. I saved her and as a reward was given three days to make her love me or I would cease to be.

She spent those three days in ICU fighting for her life.

Fate, what a cruel bitch.


I think Nya has forged new ground for me.  What are the Anubi?  Got it! – Check.  And who or what are Yazaron?  Now I have an idea – Check.   Ms. Rayne actually made Wiccan Haus seem even more refreshing and new.  Now that is an amazing feat, because it is already pretty darn great.

Blaine could likely be the most unlucky person.  She is so unlucky that she believes that if anything ever good happens, something even worse is coming and sadly; she would be right.  She has lost everything, not once but twice.  Now she is trying to heal and she unexpectedly has “won” a trip to Wiccan Haus.  Even though she knows nothing good will come from accepting the trip; what does she have to lose?  Everything is already gone.

On the night Blaine lost everything, Hayze found something he thought he would never find; his mate.  Now with only three days to claim her, she is in no condition to accept him.  His fate has been sealed.  Months later he is taking one last chance to be with her on the island.  Even though she wants nothing to do with him, he just wants to be near her before all is lost forever.  He doesn’t want her to hurt anymore, so he is giving everything up for her.

Reading how these two found each other was wonderful.  At times I wanted to just smack Blaine for being such a cruel wench, but if you looked past her pain you could almost understand it.  At times I also was inclined to smack Hayze around a bit too.  With his warrior heart, he should have fought harder, but he likely didn’t expect much after so much time had passed.  After the fog lifted and all was said and done, their mating was intense and very unique.  Great job Ms. Rayne!

Unveil My Heart is an exceptional addition to the series and Ms. Rayne did a fabulous job.  This is yet another treasure to be included in the Wiccan Haus world.


Below are my reviews of the series!