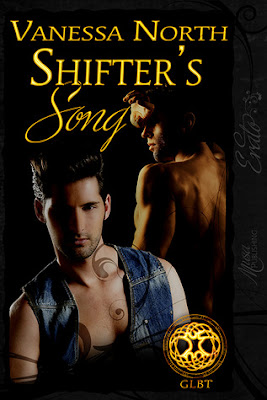 Edouard Bonsaint has a bear-sized problem. He hasn't shifted in ten years, and isn't sure he even can anymore. Chaperoned by his youngest brother, Bruno, he heads to the Wiccan Haus to ask Rekkus for help. But when Bruno doesn't show up on the other side of the portal, Edouard's inability to shift is no longer his biggest problem.

Lincoln Tucker has it all: money, fame, and a golden voice. But he's in the closet twice over--few people know he's gay, and even fewer know he can shift into a songbird at will. Downtime at the Wiccan Haus between tours allows him to be himself. Throw a big toppy bear-shifter into the mix, and Lincoln might just have all he's ever wanted--if he can trust himself to hold on to Edouard.

With passions and tempers burning hot, can Lincoln help Edouard bring forth the bear and save his brother?


If I had the ability, I’d be doing back flips.

When I finished Shifter’s Dance earlier in the week I was hoping, praying and I likely would have been begging to read about Stephen’s brothers, Edouard and Bruno.  I knew there was another Wiccan Haus book out there, but since I didn’t have it in my greedy little hands, I let it go.  I actually thought there was no way Vanessa already had finished one of the brother’s books.  Boy was I 110% wrong.  Not only is it done, published and excellent; a little birdie told me she is working on the last brother’s book as we speak.  Again, imagine the back flipping and dancing around.  Trust me it is all in my head and not in reality, because I’d hurt myself.

The Bonsaint brothers are heading to Wiccan Haus for a little R&R and to give newlyweds Stephen and Romy some peace and quiet.  Edouard also plans to work on his inability to shift into his bear.  Things didn’t go as planned.  For some reason Bruno didn’t make it to the other side of the portal.  Edouard is understandably upset, but the sexy Lincoln is there to take his mind off his troubles.

Lincoln is a man in need of a break.  He is a high profile singer and the stress of touring and the pressures his big sister keeps piling on him; have him at his wits end.  It’s time to break away and relax in the comforting arms of Wiccan Haus and he’s seen the arms he wants wrapped around him, Edouard’s.

Edouard’s stress from his missing brother and the likelihood he won’t be able to help search for Bruno, because he can’t shift, has him stir crazy.  One note from a lovely Blackburnian Warbler settles his soul and he is able to shift into his brown bear once again.  Now the only thing he needs to worry about is hurting his lover Lincoln.  He will not let the past repeat itself.

First the thing that stood out for me in Shifter’s Song was that even though they are both shifters they didn’t fall in the shifter’s mating trap; the zing and recognition, lust fills the air, they fall in bed together, because hello, their instincts are making them do it and the horns toot and the bells ring and they live happily ever after.  Nope these men fought it all the way.  Yes, one of them accepted it sooner than the other, but there was a bit of a battle to accept fate.  It wasn’t absolute instinct for them.  They had to work for it and let me just say, YAY!

Second thing that was a shining beacon for me…I absolutely loved these two men’s names.  Both are first for me and well like I said, I loved them!!

Finally third, I’d like to congratulate Vanessa for writing the first M/M Wiccan Haus story.  You have set the bar high and if I was sitting next to you, I’d be patting you on the back; very well done.  Their romance felt natural, yet very sexy and steamy.

I think I only had one slight problem with the story.  Edouard wasn’t upset enough about his brother being missing.  I can understand that he was distracted by the loveliness of Lincoln, but with him being the oldest and a big protective bear, I felt there should have been just a bit more angst.  It really isn’t a big deal, but I just had to put it out there.  Now that I’m over it, Shifter’s Song was AWESOME!!

The story was well thought out and it was nice to see Stephen and Romy again.  I also love how all three of their books are flowing so well together and I personally can’t wait for Bruno’s book.  You hinted a bit about Bruno, without giving anything away and I’m booking my trip to Wiccan Haus to watch it unfold firsthand.  All aboard, the ferry is about to leave the port!

Below are my reviews of the series!