What can be better than angels?

How about hot angels?

Deena Remiel is here today to share HER angels with us today.
She is also giving away a signed paperback copy of the first book in the series - Trinity!

So take a moment to meet Michael, Raphael & the rest of the gang. 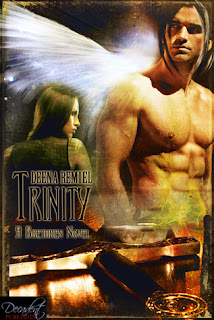 One way or another, terror will reign tonight.

Emma Livingston, a single mom, has been through hell—and back, so she thinks. While dealing with her five year old daughter’s night terrors, she attempts to live a normal life. That is, until the being from those very nightmares comes to visit her. Has her child been dealing with a real demon while she thought he was only a figment of an active imagination?

Michael D’Angelo is known to everyone in Prophet’s Point, Arizona, as their loving elementary school principal. But to The Brethren, he is known as the most powerful Protector. Immortal and angelic does not mean he’s without doubts or fears. While trying to protect Emma and Hannah, his tortured past comes back to haunt him. Can he overcome it? Or is he doomed to repeat a failure he has lived with for what seems like an eternity?

As Emma and Michael come together to protect Hannah, ancient secrets are revealed and faith is tested. When a prophecy is exposed, questions must be answered… Can Emma learn to trust enough to love again? Can Michael believe in himself enough to show Emma how? And will they be able to protect an innocent child, not to mention save the world as they know it, from total annihilation? 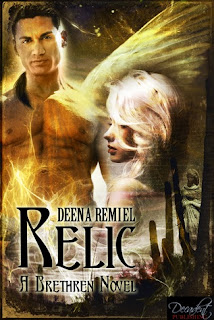 Raphael, a Brethren Savior, an angel with a forgotten past, has lost his power to heal and is on a self-imposed guilt trip to get it back. If he can’t, his tour of eternal duty as Brethren Savior will be revoked. On his journey, he winds up enmeshed in a web of attempted murder and resurrection, all thanks to a woman he’s only seen in a photograph and by chance on an Arizona desert hiking trail.

Serena Sikes is a wanted woman. Desired by “undesirables” for a gift her brother gave her—a stolen relic with suspected healing powers. Hunted down in the Arizona desert and left for dead, she is found by none other than the angel who cannot heal.

Raphael and Serena are inexorably bound together, for locked deep within the relic’s heart had lived the soul of his long lost wife. Now, it resides inside Serena. Evil lurks around every corner as Raphael tries to keep both Serena and his dead wife’s soul alive and lustful temptation at bay.

Three souls bound together by an ancient relic, bound by a timeless gift, and bound by a love that is eternal. 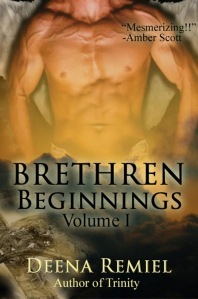 The Brethren. Who are they and why are they here? Discover the origins of these enigmatic angels manifested on Earth for millennia. Lose yourself in their compelling stories of human salvation and triumph over Evil.

**This is an anthology of three short urban fantasy stories that were originally part of an online serial. It is meant to be a companion to the Brethren series, and not necessarily a stand alone, but can be read as such. It brings us closer to three of the nine Brethren, Gabriel, Nathanael, and Cassiel- who they are and what they do. There are more stories to come. There is no romance here, but plenty of hot-blooded angel!

Yay, Deena is giving away a SIGNED copy of  Trinity
US ONLY

Many entry chances are available.
By entering the giveaway you are agreeing to the terms outlined in the Rafflecopter widget.