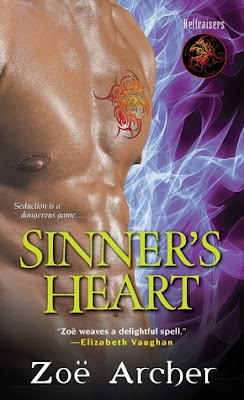 DEMONS OF THE PAST

Abraham Stirling, Lord Rothwell, was a fighter once, a soldier in the Colonies. But Bram returned to London with more nightmares than tales of glory. Now he drowns his senses in the arms of countless women, while his friends, the Hellraisers, ensure he needn't sin alone.

Until, that is, the Devil himself grants them each a wish, undoing their camaraderie as they explore their wicked powers. Bram finds himself magically bound to Valeria Livia Corva, the sensuous priestess who raised the Devil the first time—and died to send the demon back.

She may be a ghost, but Livia is no angel. The raw passion she witnesses in Bram's memories isn't much different from her behavior when she had a body to enjoy. But it doesn't make it any easier to convince Bram to become a warrior again, lest all London burn. And the fierce desires reawakening within her might just start the blaze...

Livia initially brought the Devil to our realm centuries ago and she paid the ultimate price to return him, death.  She has been a constant nuisance to the Hellraisers from the very beginning.  She has saved James, the Earl of Whitney and Leo Bailey from the Devil’s trap, but will she be able to save Bram, Lord Rothwell?  And will it be enough to send the Devil back to hell?

Bram is a lover and a fighter.  He has been cutting a wide path through the women of London, seducing them with his looks, charm and his special gift bestowed upon him from the Devil, the gift of persuasion.  In an act to stop the Devil from giving Bram more gifts Livia threw herself in front of Bram and now they are bound together.  Two like souls, who would rather be anywhere but stuck together.

Livia knows she needs to convince Bram to help, but when he has always only been for himself, he will be a hard one to convince.  Their bond is the key.  It shows these two who the real person is inside; all the good and the bad.  Let’s just hope that there is time to save London and the world.  Sacrifices are made and loyalties are tested.

I was shocked to discover, at the end of Demon’s Bride, that not all five of the men would be getting their own books, but I really liked the direction Ms. Archer took.  She has kept me guessing and I was equally stunned that this is the final book of the series.  She has continuously kept me on my toes and I never knew what she was going to put in front of me.  I like reading the unknown.

Sinner’s Heart finished out The Hellraisers series very well and Ms. Archer should be proud of herself.  She has written a paranormal series that was unique and engaging.  She introduced characters that I loved to hate and the strong women who made them human again.  Sinner’s Heart is filled with historical elements that don’t over take the novel; with a distinctive paranormal feel and a dash of steamy sexiness.  If those elements intrigue you, you may enjoy falling into Ms. Archer’s Hellraisers world.


Kensington is giving away one (1) copy of the second in the Hellraisers series!
I'm giving away my plain cover ARC copy of Sinner's Heart.

Thank you to our sponsor - Kensington!  Be sure to friend them on Facebook and check out their website.

You can also visit their Facebook app to find some great contests and excerpts, along with polls and quizzes about their books. The direct link to the apps are here:

a Rafflecopter giveaway
Posted by Toni at 9:36 AM