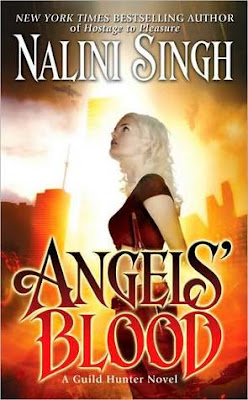 This book is one of the first books I've read by author Nalini Singh. I just got it and decided to give it a try because I liked the title and I thought I might like it better than the Psy series she has. I'm so glad I picked this book up.

The main heroine is a character by the name of Elena Deveraux who is a born hunter. This basically means she was born this way and this way meaning she has extremely sensitive nature to smells, specifically vampires. Elena works for the Guild as a Hunter who tracks down vampires. In this story there is an interesting twist... she tracks down these Vampires for ANGELS, specifically the angels who "made" the vampire.

Basically, humans want to be immortal, they approach the Angels and petition them to become a vampire. If they are chosen to be a vampire they have to swear a blood oath to basically do whatever the Angel wants for the next 100 years... think of it as trading your first 100 years of immortality to be a slave to the Angel who made you.

Elena who is a hunter, tracks down these vampires who have basically "ran" away from their angel because they don't want to do 100 years of service so they try to run away. Elena catches them, sends them back and gets paid good money to do it.

Elena comes to the attention of Raphael who is an Archangel of New York and an extremely dangerous predator. See, in this series angels are not good and maybe not evil either... they have lived for so long (Eons) that some of them have lost their humanity because they've seen so much bloodshed in their life. Raphael meets with Elena, gives her a test and hires her on the spot to track down a Rogue Archangel. She tries to tell him that she can't track angels... only Vampires but Raphael persists so Elena decides to do the case.

Raphael is an agonizingly, beautiful, scary, tempermental Archangel. Elena is a very outspoken person who does not let anything intimidate her. Raphael tries from the very beginning and even though Elena is scared she refuses to grovel and while it irritates Raphael to no end he is also interested in her because he feels intrigue when he's around her and for an Immortal that is priceless.

In this story you meet many different angels, vampires, humans who live in this interesting place that's basically ruled by Angels. I really enjoyed Elena's hunt for the Rogue Angel Uram and her seduction that Raphael performs.

There are enough twists and turns in this book and you don't find out a LOT of information until the very end. The end will leave you waiting to grab the next book as soon as you can. Really good first book in a series and I really like the authors imagination where she creates a world of Vampires who are made by Angels, who aren't really sweet and angelic but walking a fine razor line. If you try it out feel free to let me know what you think!

Reviewed by Chelsea for Paranormal Addicts
Posted by Toni at 1:36 AM