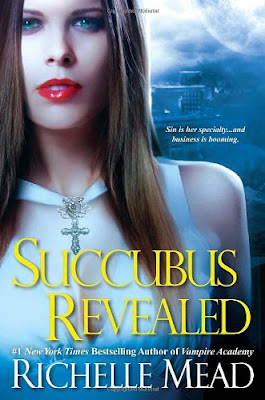 In Georgina Kincaid, succubus and she-demon, #1 New York Times bestselling author Richelle Mead has created one of her most enticing characters. But with a shot at love, and maybe even redemption, is the ultimate seductress finally going soft? Like hell she is. . .

Georgina Kincaid has had an eternity to figure out the opposite sex, but sometimes they still surprise her. Take Seth Mortensen. The man has risked his soul to become Georgina's boyfriend. Still, with Lucifer for a boss, Georgina can't just hang up her killer heels and settle down to domestic bliss. In fact, she's being forced to transfer operations. . .to Las Vegas.

The City of Sin is a dream gig for a succubus, but Georgina's allies are suspicious. Why are the powers-that-be so eager to get her away from Seattle—and from Seth? Georgina is one of Hell's most valuable assets, but if there's any way out of the succubus business she plans to take it—no matter how much roadkill she leaves behind. She just hopes the casualties won't include the one man she's risking everything for. . .

This is a fantastic conclusion to an exceptional series.

With every novel in Georgina’s series I have felt a connection. She is such a lonely soul you can’t help feel for her. Never wanting the hand that was dealt to her, she chose her life for love. Ms. Mead has written an amazing heroine and I will miss her immensely.

Georgina has been a succubus for way too long. She is in love with a man that she can’t live without, but is destined to slowly drain away his soul. Seth has come to terms with his relationship with Georgina and understands her duties as a succubus. He would do anything to be a part of her life no matter the consequences.

I highly recommend that you read the whole series in order. Now that the story is concluded all the lovely little morsels of information and mystery have come to light under Ms. Mead’s masterful storytelling. I remember reading Succubus Dreams ready to never read about Seth again. I had never been so enraged while reading a story. The emotions that this series has pulled from me have left me drained and elated at the same time.

My normal reviews go into the details of the characters and plot. I’m going to forgo that this time, because you really do need to start from the beginning. After reading this final book I’m content and satiated. Ms. Mead closed the series brilliantly. While I can see an inkling of a spin off, I can rest assured knowing that this journey is concluded. I do hope she will bless us with the continued stories of several of the characters. The supporting cast is exceptional and I loved every one of them.

Run don’t walk to get this whole series!! It is sexy, funny, infuriating and a pure joy to become immersed in.  Ms. Mead does not disappoint her readers in her telling of Georgina’s adventures. This series will have a permanent home on my bookshelves and will be a well read series for years to come.

Thanks for reading - Toni
Posted by Toni at 1:03 AM