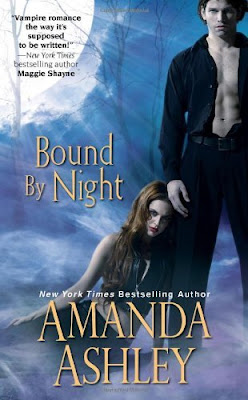 Once featured in a horror movie, the crumbling Wolfram estate is said to be haunted by ghosts, witches, and worse. But Elena doesn't believe a word of it—until she spends the night and wakes up in the arms of a compelling stranger. . .

Tall, dark, and disturbingly handsome, Drake is the most beautiful man Elena has ever seen. For centuries, he has lived alone, and Elena is the first woman to enter his lair—and survive. And Drake is the first man to touch her heart and soul. By the time she discovers who he really is—and what he craves—it's too late. Blood lust has turned to love, and Elena is deeply under Drake's spell. But forever comes at a price for each of them. . .

Bound by Night is a sensual tale of old school vampire lore, filled with burning passion and the hurdles lovers will endure to keep it.

Elena Knightsbridge is a young woman who has had a hard life. After the death of her parents she is relocated to Romania to her Aunt’s home. Years later and after more loss in her life, she is isolated and trapped with her Uncle who has just proposed marriage to her. With nothing to her name, she does the only thing she can do to escape – RUN!

Drake Sherrad has lived for over 500 years. Times have changed and he is starting to question his existence.  On the night he finds Elena in his home, he is intrigued with her. He has something new and challenging to discover not to mention tasty too.

Panicked and scared, Elena runs out into the night to the only place she can go for the time being, the abandoned Wolfram Castle. The castle is far from abandoned. Drake returns home after a night of hunting and finds the alluring creature in his lair. Their attraction is immediate, but is cultivated slowly over time. Their love is forbidden and riddled with challenges. As we venture into the secret world of vampires we are taken on a journey of unbridled passion, deception and change.

The story had a familiarity to it, but yet felt unique. Drake had abilities that fell into the mysterious category and these vampires really did have an old world feeling about them. Elena is a modern woman, but she grew up old fashioned due to the remoteness of rural Romania. Bound by Night is very sensual. The sex is obvious but not described in details. The acts of seduction and kissing were more in depth. Your imagination has the ability to soar and blossom under Ms. Ashley’s storytelling.

Her new vampire universe has some incredible twists and turns in it, along with the warm comfort of the familiar. The potential of the series is fascinating and will be a pleasure to read. I’m ready to dive right into the second book in the series – Bound by Blood – available now.

Thanks for reading - Toni
Posted by Toni at 1:01 AM