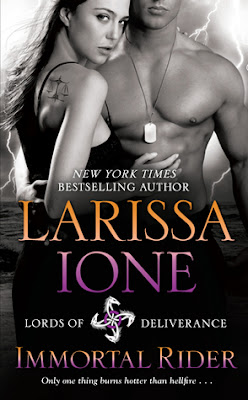 I really enjoyed this book, just as much as I have all of Larissa's books. In this story we get Limos one of the four Horsemen and Arik. Basically at the end of book 1 we all saw Arik kiss Limos and basically get sucked into Hell. Kinda of scary and nice little cliffhanger.

Limos is actually betrothed to Satan and judging from how fast Arik got sucked into Hell, he's also pretty jealous, especially when Limos had kissed him back. Everyone's looking for a way to free Arik from Hell, which is a pretty daunting task because exactly where is he?

During this time Arik is literally stuck in Hell for I believe it was like 4-6 weeks? A long time to be sure. During this time he's tortured repeatedly and all they want him to do is to say Limos name while in agony, but if you remember from the ending on the last book Limos pleads with him not to say her name. While he's being tortured they keep stopping to let a Seminus demon heal him (and the answer is no, none of the Seminus demons we know!). He eventually gets out of the Hell and at the same time Limos finds him. She takes him back to her place and he thinks he's dreaming, which he is not. There's a lot of side stuff going on in the plot with secondary characters and lots of drama unfolding from their brother Respeth aka Pestilence now, who's literally reeking terror on the human world and turning certain spots into literally hell on earth.

I don't want to say too much but I did enjoy the story. Limos does have a lot of Deep, Dark secrets she's kept from her brothers and from Arik but in the end she faces the music and confesses them..its not perfect but if I had kept a secret for THOUSANDS of years, well I wouldn't be rushing forward to "admit" my deeds either.

Some may hate it for that but I intend to keep stalking Larissa's delicious books as they keep me satisfied until the end and craving the next release. I can't wait for some of the other stories to come into play like the rest of the brothers, a certain sexy angel and a harvester.  I really hope they have a story because yeah, totally intrigued here.

If you're looking for a uniquely fresh read I suggest you give this book a try and if you haven't already pick up her Demonica series FIRST, then move on to the Lords of Deliverance books.

4 Stars from Paranormal Addicts
Posted by Chelsea Rafferty at 12:54 AM