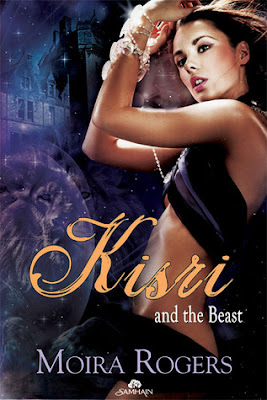 After three years at war, Ennon bears the burden of seeing the High Lord’s vast armies home. Keeping thousands of fiercely independent lions in line isn’t easy. When his soldiers discover a beautiful, royal female hidden beneath an illusion spell, the lure of her inheritance threatens the order of his camp.

The men of her family protected Kisri, until the war stole them away. Tired of defending herself from greedy suitors, she’s in search of her only remaining male relative. Instead she finds Ennon, her cousin’s most dangerous warrior. Perhaps the only man in the kingdom who has no interest in claiming her birthright. Which makes him unique…and tempting.

Delivering Kisri to his High Lord’s side—while keeping his distance—is Ennon’s one and only duty. Yet Kisri’s untutored advances crack his formidable resistance. And she proves to be a dangerously adept student. Especially when their passion wakes a magic beyond their control…


Warning: This story contains a dangerous shapeshifter warlord, a lioness with a sword, innocent passion, sexual awakenings and a happily-ever-after worthy of any fairy tale.

“Kisri” is the second novella in the series …and the Beast. While novella #1, “Sabine” is a wonderful read, I feel it is not necessary to read it to delve right into novella #2. Moira has done a great job of connecting the two stories, but they can still be read alone. Now that I said that, don’t miss out on reading “Sabine”.

Kisri is the last of the royal females in her family. Well sought after and desired. She wants more though. She wants to be chosen for herself not her position or money.

Ennon is the First Warlord of the Plains. He is a strong man with money and position. He has worked hard for his High Lord and is very devoted to him and his people.

Kisri runs away from being forced into a mating she does not desire. Doing so has thrown her into Ennon’s path. He is now charged to return her to her cousin, Malrion the High Lord of the Plains. Kisri is determined to free herself from her obligations and claim her own life and love. Ennon is a man with a mission. Return his High Lord’s cousin safe and sound. Both discover that they will get more than they bargained for.

I loved and hated “Kisri”. I’ll start with the hate so you don’t get me wrong. I hated that it was short and I loved the characters so much that I wanted more development of them. I went into this story knowing it was a novella. They are supposed to be short and sweet (oh and hot too). When I was done, I just wanted more, much more.

I loved the story even do to its brevity. It had all that was needed to be fulfilling yet make you want more. The interaction between Kisri and Ennon was great. You felt their frustrations and their passion. I found myself smiling and sighing.

“Kisri” is a very enjoyable novella. A wonderful short read. I hope you pick up both “Sabine” and “Kisri”. They complement the storyline very well. Here’s hoping there are more stories to come.