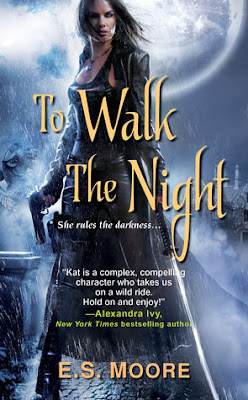 Even a vampire has to face her inner demons…

Kat Redding is the very thing she hunts: a vampire, thirsting for blood, capable of killing any creature unlucky enough to get in her path. The difference is, Kat kills her own kind in order to protect human Purebloods. She’s good at what she does. Good enough to earn the nickname Lady Death—and the enmity of every bloodthirsty being around. But now a vampire Count is intent on merging his House with a werewolf cult to create a force of terrifying power.

Kat can’t allow that to happen. Even if it means taking on a den of weres and a vampire more ruthless than any she’s encountered before. She has the weapons, the skill, and a few allies. But that may not be enough to eliminate the Count before her own dark nature rises to the surface—and costs her whatever is left of her humanity…

I can see the future and it says that this new series will be a hit!

OK, I really can’t see the future, but I sure do have high hopes for this great new series!  Pulse pounding and new, To Walk the Night is action packed!  I will say though the foundation work was a bit slow, but once that was built and the action started - POW - what a kicker.  Now Mr. Moore can hit the ground running, propelling us into a unique universe where the outlook might be dismal, but there is still hope for the future.

Kat Redding was born after the Uprising; when the vampires and werewolves rose up against humans to take over the night.  Since then the monsters of legends rule the night while the purebloods, humans that have not been tainted, live in the day.

Kat and her brother Thomas once fought against the stuff of nightmares until they became tainted.  Now she fights her own kind to protect the purebloods, even while the darkest engulfs her.

This story had a “Blade” feeling to it.  I am so used to romance paranormal books, To Walk the Night, was a refreshing change.  While this series may lack romance, the action more then makes of for it.  Both guys and gals are going to enjoy Kat and her kick-butt ways.  She is a no nonsense girl and the vampires and werewolves better watch out.

E.S. Moore has envisioned a new take on supernaturals that is invigorating.  He has intertwining new ideas about vampires and werewolves, while still holding fast to some the old standards.  The possibility of adventures, battles and action seems endless and I’m looking forward to this journey.  I am on the edge of my seat waiting for to the next installment, Tainted Night, Tainted Blood, coming out in July.  Keep them coming E.S, because this fan can’t wait for more!


Thanks for reading!! - Toni