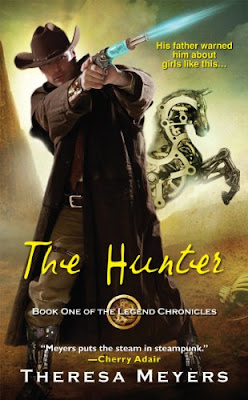 They're the Chosen—Winchester, Remington and Colt—brothers trained to hunt down supernatural beings using the latest steam-powered gadgetry. It's a hard legacy to shoulder, and it's about to get a lot more dangerous. . .

A Devil Of A Job

Colt Jackson has gotten his name on many a wanted poster with success in the family business: hunting supernaturals across the frontier. Lately, though, there's a sulfur stink in the wind and the Darkin population is exploding. A rift in the worlds is appearing. To close it, Colt will have to do the unthinkable and work with a demon to pass arcane boundaries no human alone can cross.

Except when he summons his demon, he doesn't get some horned monstrosity: he gets a curvy redheaded succubus named Lilly, who's willing to make a bargain to become human again. He also gets Lilly's secret expertise on the machinations on the dark side of the rift. And her charm and cleverness help to get them out of what his silver-loaded pistol and mechanical horse can't. Of course, when all hell breaks loose, he might have to sacrifice his soul. But what's adventure without a little risk?

The Hunter has nonstop action with a bit of sexual tension thrown in.

For the last ten years, Colt Jackson has known about the supernatural world. Trained by his father to fight the Darkin, he is a man with a mission, to stop supernatural’s at all cost. To seal off the gate to hell, he must now rely on a being he is sworn to destroy. He needs the help of a demon to find his father’s portion of the Book of Legend.

Lilly was born a human. She made a pact with a demon lord to protect her sister and has been living as a succubus for the last twenty-five years. During this time she has studied the Chosen, three brother’s prophesized to open the Gates of Nyx. Now her master wants her to seduce Colt for his soul and the book, but she needs Colt for something else…her freedom.

Right from the beginning the chemistry is hot and it’s not just because Lilly is a succubus. Even she feels the connection and is hard pressed to fight it. Colt is leery of course. He has a job to do and in no way can he ever trust a demon. Slowly they learn to trust each other, but with all the forces of evil against them they have to work extra hard to complete their task. Hers is to become human again and his is to find his section of the book.

The action is so well detailed you almost feel like you are there. The world Ms. Meyers has created is fascinating and beautifully described. She really has a knack for pulling you into an action sequence. She writes fast paced and heart pounding scenes with ease. I also enjoyed the way she built the sexual tension between Colt and Lilly. The anticipation was almost as good as the actual event.

This is a smart beginning to what looks to be a thrilling and exciting trilogy. While this is my first steampunk novel that I have read, and I’m not too sure if it is a genre I’ll enjoy, but I do believe that I will be reading this entire trilogy. Ms. Meyers has captured me with spunky characters, fascinating gadgets and an intriguing plot. I’m looking forward to the next book in the series, The Slayer, scheduled to be released April 2012.

Thanks for reading - Toni
Posted by Toni at 1:31 AM