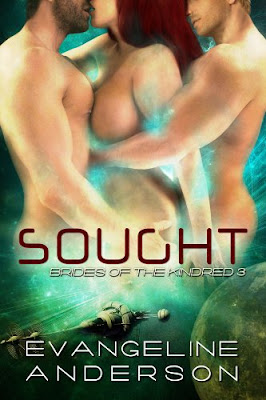 One Woman, Two Hot Guys, A Galaxy of Problems...

Kat O’Connor is no pushover. She’s a no nonsense girl with a commonsense approach to life. But there’s nothing common about what’s happening to her lately…

First she was forced to have a kinky mind ménage with two of the hottest and most irritating men in the galaxy—Twin Kindred warriors, Deep and Lock—in order to locate her kidnapped friend. Then she couldn’t get their feelings out of her head. And now she’s on her way to their home planet, Twin Moons, to find a cure for the debilitating illness their unorthodox joining caused, when all she really wants to do is go home.

Now Kat and her twin warriors are on a quest—but they’re all looking for different things. Kat wants to find a way to dissolve the half-formed bond between them so she can be alone in her own head again. Lock wants to convince both her and his brother to complete the bond which will keep them together forever. And Deep is trying to protect his heart and love Kat from afar…though it grows more and more difficult to deny the hunger he feels for her growing inside him.

Their travels will take them from the uncharted wilds of Twin Moons to the Deadworld of the Scourge home planet. Will Kat find a cure for having other people’s emotions crowding her mind? Will Lock convince his brother and the woman they both love that they’re all meant to be together forever? And will Deep ever unshield his heart long enough to let Kat in?

I do believe this series has gotten better and better. I love Ms. Anderson’s storytelling in this series. Normally you have a book in a series that basically stands alone within the series. In this series "Brides of the Kindred" you get more. You get the story of the main characters, but she weaves the other characters in so well you are just as anxious to hear about them. The characters and storylines are beautifully integrated.

Kat O’Connor is a beautiful woman, though she does not see herself that way. Kat is lovely inside and out. All she sees is an overweight woman. Her past is burdened with the awful pain of her divorced parents. She vows never to allow herself to be put into a relationship that is filled with fighting and pain.

Locks Tight and Stabs Deep are Twin Kindred. Twin brothers of light and dark. Locks is the light brother filled with kindness and understanding. He is lighter in coloring and temperament. Deep, the dark twin is brooding and intense. His hair is blue black just like his soul. While Lock showers Kat in love and peace, Deep bombards her with turmoil and angst.

A past event of the brothers has tainted Deep in a profound way. He will never allow himself to forgive himself and allow his heart to feel again. Kat refuses to release her past and feel for the brothers. Lock is put in the middle of the situation. Loving his brother and Kat so strongly all he can do is hold onto the hope that someday they will all be together.

“Sought” is a well written story that catapults us into the story of these three lovers. Their journey began in prior books of the story and I highly recommend that you read this series in order. Even though I knew they were going to be together. Ms. Anderson did a wonderful job keeping me guessing and made it very hard to put the book down. Action is nonstop, but you don’t feel like you need a break. The sex scenes are hot and up until the end you never really knew how “the act” would be accomplished. I sure didn’t see that one coming. Whew!

Mix together action, suspense, and of course, throw in some hot alien sex and you have a creation of epic proportions. I personally cannot wait for the next and final installment of the Brides of the Kindred.