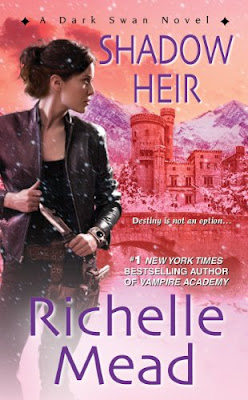 I really love Richelle’s books. I’ve read all of her series and my favorite part is that I know when I buy Richelle’s books that every single book I buy no matter if it’s her VA series or Succubus series or Dark Swan series, I KNOW I’m going to get an excellent story that’s pretty flawless as far as writing goes. I really enjoyed Shadow Heir and finished it about 3 weeks ago but I honestly didn’t know how to write my review. If this book was just part of a series and there would be another book after this one explaining some things I would have been super happy. But, this is the last book and while things worked out, they were a bit differently than I thought they would be and the ending left a bittersweet taste in my mouth.

As we all know, Eugenie was pregnant in the last book and turned to King Dorian of the Oak Lands at the end of book 3. She was asking for protection from Kiyo her ex-boyfriend and whom Eugenie believes is the father after an incident with taking antibiotics and then being intimate with him. He’s after Eugenie because some of the Gentry believe in the prophecy of the Storm King’s legacy and about the first born grandson from him will supposedly destroy the human realm. Some of the Gentry don’t care and either A. Support the prophecy or B. Support Queen Eugenie or King Dorian.

At the beginning of Shadow Heir we have Eugenie, her sister Jasmine, and Pagiel who is the son of Ysabel (you’d remember her originally as being one of Dorian’s conquests/lovers). Pagiel however is not as rude as his mother and fully supports Eugenie and is around the same age as Jasmine. They are all headed from one of the Gentry gates to go to the Doctors in Ohio to check on the twin babies Eugenie is carrying. Dorian doesn’t like her going out and endangering herself but Eugenie is pretty insistent on not relying on Gentry magic and points out that the infant death rates are pretty high. She’s going to the doctor in Ohio because of all the other Gentry’s trying to kill her, including her ex Kiyo and his former girlfriend Queen Maiwenn, who fully believes the prophecy will come to pass so they are trying to get Eugenie so they can kill the baby boy inside her ( a boy and a girl fraternal twins).

Eugenie eventually decides to go into hiding in the human world and the only one who knows where she is hiding is her stepfather/shaman who helps her go into hiding with a shaman friend of his. Jasmine and Dorian are pretty upset with her for leaving, while pregnant and hiding out where they don’t know if she’s safe or not. Eugenie goes anyways and discovers the Shaman and her husband are pretty great folks who treat her like family.

There are some other major plot details that go along in this story line but I don’t want to ruin it for you. I did enjoy the book, but I would have enjoyed it even more if I knew there was another book or even another short story explaining some details. I actually cried at the end of this one and I believe that is a first for me on crying over Richelle’s books. I did enjoy it but I’m a bit sad about everything.

Richelle, please take pity on your devoted fans and give us some updates or a side story or even a side series that ties back into this one. Please don’t leave us hanging with that ending. We want to know more about two special someone’s, the stuff with Dorian, how Eugenie copes etc. You’ll get it if you read it folks but I had to write it in code so I wouldn’t spoil it for anyone.

Reviewed by Paranormal Addicts 4 Stars
Posted by Chelsea Rafferty at 12:41 AM