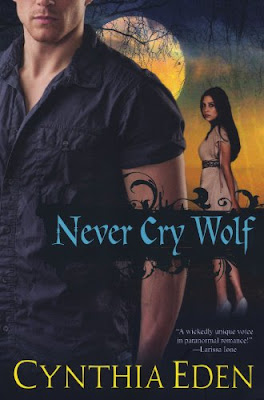 Lucas Simone is not the kind of guy you mess with. He's big, he's strong, and his eyes hint at a wilder side most women can't handle. Of course, that's because his predatory instincts are no metaphor-he's a genuine Grade-A top-quality werewolf, tough enough to fight his way to dominance over the scariest pack on the West Coast. There's only one chink in his armor. Unlike most alpha dogs, Lucas has a reputation for protecting the weak and innocent.

Sarah King is counting on that protective impulse-it's the only thing standing between her and certain death. There are only two problems: one, she's not quite as innocent as she'd like Lucas to believe. And two, if he doesn't stop stoking Sarah's animal lust, it's only a matter of time before her own wild side gets unleashed...

First off, I would like to clear up some confusion. At least I was confused. “Never Cry Wolf” is not part of the Night Watch series, though it does take place in the same universe. It DOES occur after “Immortal Danger”, but doesn’t seem to be part of an actual series. I know confusing, right? “Never Cry Wolf” can be read alone, but after reading it, I do plan to go out and get “Immortal Danger”. It sounds like a great read.

Lies, deception and death. All three follow Sarah and she needs the help of a strong alpha to save her life. These are three things Lucas will not tolerate in his life.

Sarah King is not what she seems. At first glance she is all innocence and defenselessness. Sarah has many secrets and to save herself she can’t let them be known. Sarah has reasons to be scared. Her ex is after her and he has a hefty price on her head. Every supernatural wants to collect and she is in dire need of a protector. She knows the LA pack alpha has a reputation of protecting the innocent and that is what she is counting on.

Lucas Simone is alpha through and through. He will protect what is his and his pack. With a past born of pain and blood, he has zero tolerance of brutality of the weak and innocent. When Sarah comes into his life, he knows she is trouble at first site. Their relationship begins on a lie and that is something he will not stand for. His pack is in danger and he will do anything to protect them and Sarah is the key to do just that. He just needs to prove to her that she can trust him.

What these two find is not what they expected. They will need to learn to trust each other and that is not easy for either of them. The stakes are high and together they need to work together to survive. Problem is…they are surrounded by deception. Who can they trust? No one is who or what they seem. Through all of the chaos, Sarah and Lucas find something in each other, their missing pieces. Is the passion going to be enough, when one is lying to the other and the other knows it?

“Never Cry Wolf” is action packed from the start. Passion runs high and suspense and mystery is always lurking in the shadows. Ms. Eden has written a well developed story that keeps you guessing the whole way through. I am really enjoying all the different factions of her paranormal universe. She has developed a well laid out world that is consistent and extremely enjoyable. I hope to read more from Ms. Eden in the future.

Thanks for reading - Toni